Mumbai, 10 June 2019: Tier II & III cities across 50districts of the country have exhibited higher Compounded Annual Growth Rate (CAGR) of outstanding home loans, ranging from 15% to 36% during the period between FY2012-13 and FY2017-18 as against 8% to 12% observed across districts comprising leading four metros – Delhi, Mumbai, Chennai and Kolkata – during the same period, according to a JLL research analysis of the latest RBI home loan data.

During this period, India’s home loan market grew from Rs 4.6 to Rs 9.7 trillion, exhibiting a CAGR of 16%, indicating healthy demand for housing.

“The home loan data demystifies the common perception that districts comprising the top leading cities, Mumbai, Delhi, Chennai and Kolkata, drive residential real estate growth. The data clearly indicates that with development focus gradually reaching to peripheral regions, tier II and III cities of the country have attracted the homebuyers’ interest. The share of these top four districts to the overall outstanding home loans in the country has dropped to 16% from 22% during the same period. In comparison to this, the share of the rest of India has increased to 84% from 78%,” says Ramesh Nair, CEO & Country Head, JLL India.

Factors such as improved connectivity, infrastructure growth, better education and health care facilities have supported the growth of peripheral cities. The housing sector has been reaping the benefits of the growth story. “Real estate developers in these cities have also been adopting the latest construction and development trends and have been able to provide homes at competitive rates mainly due to lower land and manpower costs,” adds Nair.

Also, small scale projects with relatively shorter completion periods, developer-buyer connect and higher visibility on timely completion led to increased sales of homes. Lastly, developers have been offering homes in the sweet spot that fit the budget of most homebuyers.

“In addition to these, various policy initiatives like the Smart City Mission, development of industrial corridors, the Atal Mission for Rejuvenation and Urban Transformation (AMRUT), metro rail projects, Prime Minister Awas Yojana (Urban) and Make in India, has added value to the overall buying sentiments within these markets,” says Samantak Das, Chief Economist and Head of Research & REIS, JLL India.

“The impact of these national-level projects is expected to be long term and will make these cities more attractive destinations for various industries as well as residential real estate. The trend is prominently visible in the peripheral markets of top metro cities,” adds Das.

Chart 2: The below map indicates that the western region of the country has a higher share of districts that have Tier-II or III cities, followed by the Northern region. The skew in regions has been influenced by the economic growth pattern of various states 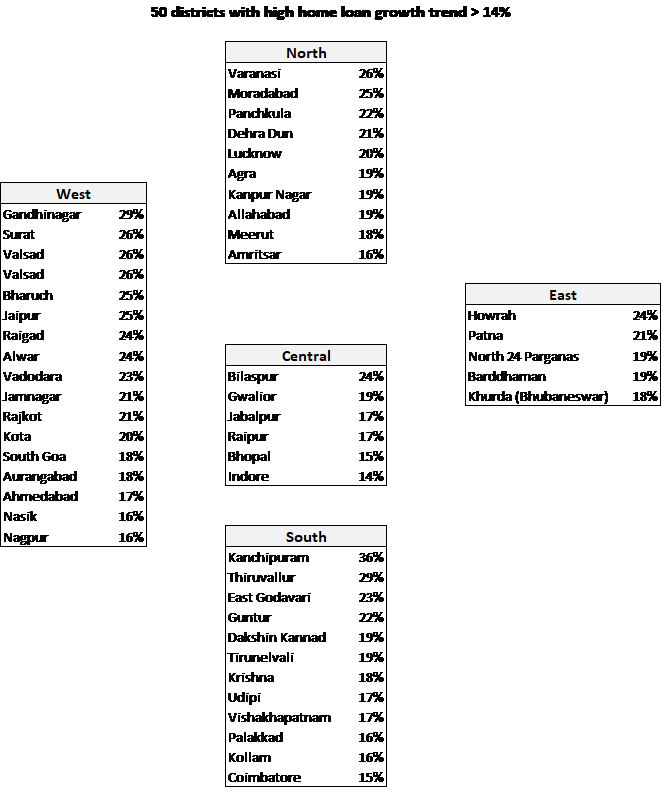 Note: Districts with home loan market growth above 14% (CAGR), outstanding home loan size above Rs 12 bn and with the presence of tier-II /tier –III cities have been selected.