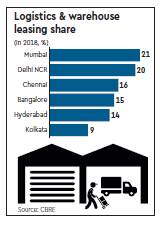 The findings of the report interestingly stated that the overall space take-up in the logistics and warehousing sector crossed 24 million SQ. FT. IN 2018 – AN ALL-TIME HIGH. Recording a growth rate of more than 40% compared to 2017, the report said that implementation of GST led to far-reaching implications on industries, more so in the warehousing and logistics sector.  Overall in 2018, Mumbai, followed by NCR, Bangalore and Chennai dominated leasing, accounting for more than 70% of the space take-up. The second half of 2018 witnessed robust leasing activity with about 14.3 million sq. ft. of space take-up, a 46% increase on a half-yearly basis. Mumbai dominated leasing activity with a share of about 21%, followed by Delhi-NCR (20%) and Chennai (16%), the report, said.

Anshuman Magazine, Chairman and CEO, India, South East Asia, Middle East and Africa, CBRE said: “We are very positive about the government’s vision to increase the sector’s contribution to the overall GDP; through more incentives for players and streamlining regulations. With technology permeating the logistics sector, coupled with the government’s push to the sector; corporates will be driven to opt for large, modern warehouses as they would seek to leverage the new GST regime as well as consolidate and expand their operations. This demand we feel would further be boosted by the entry of various private equity firms and foreign players in the Indian logistics market.”

The overall demand for logistics and warehousing space was largely concentrated in Mumbai (21%), Delhi-NCR (20%) and Chennai (16%), closely followed by Bangalore (15%). Hyderabad and Kolkata accounted for 14% and 9% respectively; while the cities of Pune and Ahmedabad collectively held a 5% share in overall demand.  When compared on a half-yearly basis, almost every city witnessed growth in leasing activity. While Chennai witnessed a growth of about 104%, Hyderabad and Kolkata witnessed a growth of 93% and 73% respectively. Other cities such as Mumbai (54%), Delhi-NCR (41%) and Pune (17%) also witnessed growth.

Development of logistics-related infrastructures such as dedicated freight corridors, logistics parks, free trade warehousing zones and container freight stations are expected to improve efficiency. The development of new warehouse facilities by organized players is likely to propel demand as occupiers will focus on expansion and consolidation.

Tech innovation to shape the future of the sector

The use of fleet management software (provides live tracking of goods), RFID systems for inventory identification and automated pallet storage is growing quickly, as is the number of start-ups aimed at bridging the technology gap. The widespread deployment of IoT is expected to revolutionize operations by creating smart warehouses that improve supply chain efficiencies.

Leading real estate developers have begun acquiring large land parcels for the development of warehousing facilities – a trend likely to continue through 2019. This would lead to an increase in the supply of modern warehouses over the coming years. While cities such as Mumbai, Pune and Chennai would remain major investment destinations, Delhi-NCR and Bangalore are also likely to be on the investors’ radar.

As the sector moves towards a more systematic mode of operation, the inflow of institutional funding and formal sources of capital have started to increase in the sector. As domestic players with larger warehouses emerge; deployment of capital in these fewer, better quality assets are likely to become easier.

Rental values for warehousing spaces across various micro-markets are anticipated to appreciate in the short to medium term. Considering persistent demand levels coupled with expected advanced developments by organized players is likely to enhance rental values across various micro-markets. Also, the growing demand for industrial spaces in various cities is also likely to fuel rental appreciation in forthcoming quarters