Only behind NCR, city has displaced Mumbai with its stock of unsold housing units

The following is the report by Anuj Puri, Chairman and Country Head at JLL India.

Bangalore’s residential property inventory overhang now stands at 32 months. With more than 84,000 unsold housing units by the end of 2Q15, the city has surpassed Mumbai in this respect for the first time. Bangalore now has India’s second-highest residential real estate inventory overhang; only the National Capital Region (NCR) is ahead of Bangalore. Another record for Bangalore in 2Q15 is that it has reached a new peak in terms of unsold inventory.

Given the rising land costs and expected cash flow issues, developers have been launching new projects in the last few quarters. The situation, however, does not reflect a disconnect between developers and buyers. According to the former, enquiries are happening but buyer sentiment has been affected by macro-economic conditions, causing them to put their buying decision on hold.

Though the overhang is higher due to launches, developers are willing to wait until their projects sell off. The primary reason behind their confidence is the fact that Bangalore remains a very end-user driven market – quite unlike Mumbai and NCR, which have traditionally been speculative, investor-driven markets. The key characteristic of being a stable market still exists in Bangalore. 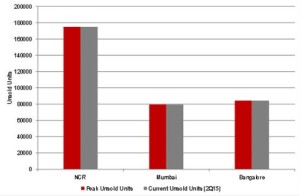 Generally, units in the price range of Rs. 35-80 lakh sell off quickly in Bangalore. Units with ticket sizes of Rs. 1 crore and above take longer to sell. Today, ticket sizes for most projects in the city range from Rs. 75 lakh to Rs 1 crore. Also, sales are slow only in relatively less popular locations like western part of Bangalore, Mysore Road, Tumkur Road.

On the other hand, good and stable demand is observed in areas like Sarjapur Road, Bellary Road, Kanakpura Road and Varthur (in Whitefield). The good accessibility from IT parks that these locations enjoy is why they are so popular with buyers.

No doubt, the developers should have waited longer before launching so many more projects in the last few quarters. Though they may be confident of the situation changing for the better due to the latent demand in the market, sales and buyer sentiment are both likely to remain slow for some more time.

Going forward, it developers would be well-advised to launch projects after fully understanding the prevailing market conditions. It is important to balance out the existing demand-supply mismatch for two reasons:

So that it does not start affecting price dynamics, and, The market does not move from stable to stagnant mode in terms of pricing due to the increased overhang.