In a report released by PropEquity, India’s leading real estate data, research and analytics firm on Thursday, Bengaluru has emerged as the number one destination in most of the parameters evaluated on for studying India’s top real estate destinations.

Surprisingly, Gurgaon has dropped at number ten position as the region is marred by project delays, expensive properties and a demand and supply mismatch.

Not just Bangalore, this latest report by PropEquity puts the Southern region of India at the top as three out of the top four cities are Bengaluru (#1), Chennai (#3) and Hyderabad (#4). These cities have topped over 50 percent of the parameters evaluated in the research.

Bengaluru has emerged as the best city amongst the top 14 cities in India and has also ranked number one on four out of the ten parameters evaluated ( i.e. size of the market, CAGR of absorption and total unsold inventory to yearly absorption ratio).

Pune has come a close second and has been solely responsible for helping the western region to gain the second spot. The NCR region has failed to make its mark on any of the parameters evaluated and thus has low regional as well as city rankings.

“Noida, Greater Noida, Ghaziabad and Faridabad on the basis of the evaluated parameters are not in the top 10 cities of India, only Gurgaon continues to remain on the list at the tenth position. On the other hand, the Southern region has performed relatively better across all the parameters and we expect this trend to continue going forward,” said Samir Jasuja, CEO and Founder at PropEquity.

Ten key parameters have been taken into account to generate the rankings, including the price, supply, absorption, inventory, and new launch trends. The study has also looked at execution delays and the size of the market in value terms.

Mumbai, which ranked first five years ago, has now slipped to the eighth positions, while Bengaluru, which did not even figure in the first five cities, has climbed to the top.

Overall, the city which has fallen the most in rankings is Noida (from fourth to eleventh) and Mumbai (from first to eighth), while the cities which climbed the most is Hyderabad (from tenth to fourth).

In terms of regions, the southern region, which ranked third out of the four regions, has overtaken the northern region in regional rankings while it has become first stat the city level.

All NCR cities occupy the bottom rankings, depicting the weakness in the region. 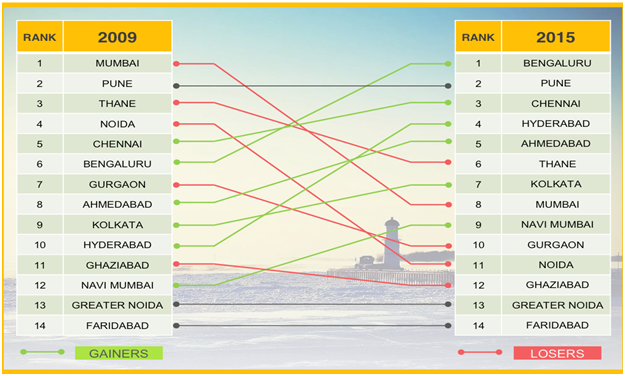 •Realty prices have remained at realistic levels and appreciated moderately.

•It has primarily been an end-user market so did not get adversely affected when investors started to withdraw from the market in the last couple of years.

•Developers are not overstretched as they have launched smaller projects and are well-capitalized.  The land prices in the south are also much lower than the northern and western markets.

•Many of the real estate projects in the southern region are sold post-construction or when they are about to be completed, which leads to an increase in homebuyers’ confidence. Developers are also not heavily dependent on cash flows from sales to fund the projects and manage their finances more efficiently.

•South Indian region has evolved as the IT hub of India since last decade and continuous increase in demand for IT space during the last few years has maintained the end user-driven demand in these cities.

•Real estate sector in West India has been deeply impacted by the sluggish Indian economy.

•The extremely slow process of getting various approvals by the Government bodies has also added to the challenges of the MMR real estate market.

•Developers in the region are also struggling as their balance sheets are overextended and debt is piling up with significant interest payouts every year without any significant cash inflows.

•The commercial real estate market has really been the laggard in the MMR region with no uptake  whatsoever in the last few quarters.

•NCR performance has been below par in all the key parameters that affect the real estate scenario in India today.

•Northern real estate developers have been deeply impacted by the slowing economy and have taken the major brunt of the impact.

•The primary reason why NCR has suffered the most is that there has been a flight of investors and over 50 percent of the sales in NCR have been investor-driven for the last 5-7 years owing to the exponential returns the market gave between, 2009 – 2012.

•Cities such as Gurgaon and Greater Noida have witnessed unprecedented sales in residential asset class but the related infrastructure development has not materialized as per expectations. Due to this the social infrastructure has also not caught up making these areas inhabitable. A key example of these micro-markets being Dwarka Expressway, New Gurgaon Region, Yamuna Expressway and Noida Extension.

•Developers have overstretched themselves by launching huge townships and large-sized projects, which were difficult to execute and required significant funding. With the paucity of bank lending on these projects, the construction pace slowed down to alarming levels.

•Prices in these regions went up very quickly making it out of reach of many end-user buyers.

•Demand and supply were mismatched in the NCR region as whopping over 1.5 lakh units were  launched just in 2011-2012.

•Eastern region has maintained its third position in the regional ranking

•Kolkata is at seventh position in the city rankings.

•The market size of Kolkata increased in terms of percentage and absorption of units previously  launched was reasonably healthy.

•Absorption levels of projects that have been launched recently is witnessing a slowdown thereby  showing that the eastern region is also not insulated during the current slowdown.