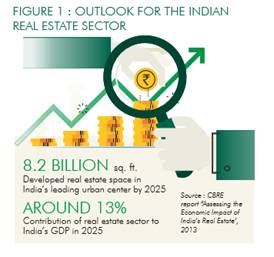 CBRE South Asia Pvt. Ltd, India’s leading real estate consulting firm, today announced the findings of its latest report titled ‘India Real Estate – Variance in Construction Costs.’ According to the report, despite a continued rise in construction costs, India’s real estate activity has continued to chart a growth curve. Sample this: the prices of cement have nearly tripled in the past 16 years while the cost of structural steel more than doubled between April 2005 and November 2017. Despite this, the overall stock of developed real estate in India’s leading urban centreswill reach 8.2 billion sq. ft. by 2025 and provide employment to approximately 17 million people across the country.

Anshuman Magazine, Chairman, India and South East Asia, CBRE, said, “The rising demand for real estate as well as infrastructure development is expected to propel the construction industry towards a growth trajectory. Already, the implementation of the GST has impacted the cost of raw materials and streamlined inter-state and import taxes, giving the industry a major boost.”

According to the report,among the six leading cities in India (Chennai, Bangalore, Hyderabad, Pune, Mumbai and Delhi), Mumbai remains the most expensive. Construction costs in Chennai and Bangalore are almost at par, as are those in Delhi and Pune. The variation in costs could be primarily attributed to different demand levels, proximity to supply centres as well as the efficiency of logistics networks across these cities. Moreover, engineering costs too vary in accordance to the region.

While the average cost of construction for a residential apartment in a mid-rise building was pegged at INR 3,125/sq. ft. in Mumbai, the price was found to be INR 2,750/sq. ft. in Delhi and Pune. In Chennai and Bangalore, the cost was INR 2,500/sq. ft., while in Hyderabad such an apartment would cost INR 2,375/sq. ft.

Commenting on the report, Mr Gurjot Bhatia, Managing Director-Project Management at CBRE South Asia, said, “The construction sector is one of the largest employment generators and has strong linkages with various industries. We foresee strong growth for the sector over the next five years, owing to a thrust from the real estate and infrastructure sectors. The construction sector has already received a boost in the form of GST which has stabilized prices. Going forward, we foresee technology to play a dominant role.”

The implementation of the Goods and Services Tax (GST) has come as a breather for the real estate industry. Aimed at introducing country-wide uniform taxation, GST has enabled builders to source materials from only registered suppliers in a transparent manner. To assess the impact of GST on construction costs, CBRE compared pre-GST taxation rates with the current system. While the impact on taxation on various works components was found to be varied, GST seems to have managed to scale down the overall construction costs to a certain extent.

However, the report also highlights certain challenges that the sector has been facing. One of the challenges that the industry needs to overcome is the shortage of quality contractors who can complete projects within stipulated time periods. This is likely to provide an opportunity for the entry of international players to plug in this gap.

The rising demand for real estate as well as infrastructure development is expected to propel the construction industry towards a growth trajectory. Already, the implementation of the GST has stabilized the cost of raw materials and streamlined inter-state and import tax, giving the industry a major boost. Further, the entry of international players would boost the use of innovative technology to ensure timely completion of projects. Therefore, CBRE expects technological innovation to radically change the future of Indian real estate. These new technologies have the potential to transform the way we design, construct and operate building assets in the future.

Overall, CBRE believes that the construction industry is at the brink of entering the next stage of the growth curve. This growth is likely to be supported by the clarity that has been offered by the GST (resulting in standard taxation rates across states) as well as the push from the government to quicken the pace of infrastructure development across the country.