CHD Developers, under the Haryana Government’s Affordable Housing Policy 2013, on Friday announced the launch of CHD Karnal Homes, the first affordable housing project in Karnal with a starting price of Rs. 13.35 lakh. 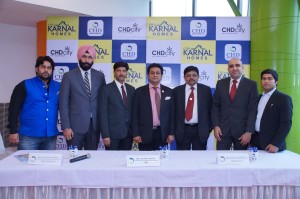 Application forms will be available till February 9 in all CHD offices and Bank of Baroda branches across Haryana, Punjab, H.P. and J&K. The allotment of 1,232 housing units – 1BHK flats and 485 – 2BHK flats will be done by Haryana Government officials through draw of lots.

Karnal Homes is a gated community located in Sector 45 on NH-1 and is part of the integrated township CHD City.

Spearheading the occasion Gaurav Mittal, Managing Director, CHD Developers, said “We are proud to bring first of its kind affordable housing to Karnal. CHD City Township is a landmark project spread over more than 250 acre of area is a landmark on NH1. Our brand stands for timely delivery and quality. We guarantee the possession of Karnal Homes to allottees within a time-frame of four years.”

Tulsiani launches Phase II of its project in Meerut