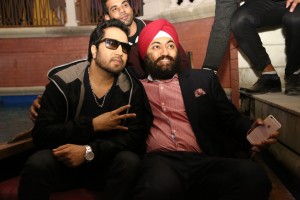 “The Grand Venice tourist destination has given an opportunity to those who could not fly abroad. They can have a feel of Venice in Greater Noida,” Yadav said while inaugurating the project through video conferencing. He said the state Government was committed to providing full cooperation and support to those investing in this area.

Thanking the Chief Minister, Bhasin Group MD Satinder Bhasin said, “We dared to dream a few years back and envisaged recreating the romance of Venice here in the heart of Delhi NCR and I’m proud that our dream has finally taken shape. We are sure that the Grand Venice will emerge as a major tourist destination not only for Delhi NCR but the whole of India.”

The glittering event saw a huge turnout of corporate nonchos, retail heads, media professionals, bureaucrats and socialites. It was followed by a scintillating performance by Bollywood singer Mika.

Prominent among those who attended the event were Rama Raman, Chairman of Noida & Greater Noida Authorities, Rajiv Kumar of DS Group, RajuChadha from the Wave Group, Balu Subramanian from Reliance, Vikram Sawhney from Sun Group, Ricky Dhal, prominent businessman from the US and Datu Abdullah from Eden Group.

Bhasin Group has come out with the ‘Grand Venice’ project at the gate of Greater Noida, about a two-minute drive from PariChowk. According to a press release, with Grand Venice, Bhasin Group has promised customers a little Italy of its own with the kind of architecture, construction, amenities and services.

Sprawling over 11 acre, the commercial project is based on an Italian theme with a similar style of architecture used where one can find Light Towers, the Leaning Tower of Pisa and the famous ‘Gondola Boat Rides’ on water canals built inside the mall. The mall also has a centralised weather management system to give the same environment of European weather with a digitalised sky with proper surround sound and visual effects. Built-in a huge area of three million sq. ft., the project also boasts of a strategic location.