Average transacted office lease sizes across Mumbai, Bangalore, Chennai and Pune have increased from the uncertain times seen in 1Q14 – prior to the general elections. Market morale was low in 1Q14, which could explain the lower sizes. Following elections in May 2014, however, market sentiment improved gradually, while Mumbai, for example, witnessed 65 per cent appreciation in average deal sizes between 2Q14 and 2Q15.

The number of transactions has also increased considerably across all these cities. Pune leads with an impressive 89 per cent y-o-y growth in transacted space per lease deal, followed by Bangalore at 78 per cent and Chennai at 67 per cent. Good days are returning for office real estate and tenants will remain in an expansionary mode. Occupiers are not only leasing larger office space, but they also expect all the space to be on the same floor. Developers are constructing bigger floor plates to meet the evolving demand.

While average floor deal sizes are increasing in the office sector, the residential sector tells a different story. In the same set of cities, residential developers are under pressure owing to sluggish sales and cash flow issues. They hit upon a unique way to keep residential prices in a favourable price range over the past few years: building smaller apartments without lowering the per square foot prices across major cities. 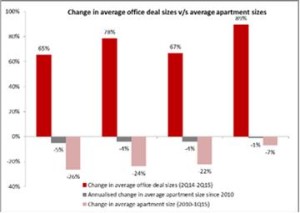 The difference is more striking if the past few years are considered. For example, Mumbai’s fall in apartment sizes from 2010 to date has been 26.4 per cent. There has been a corresponding reduction in the carpet area. For the same period, Bangalore registered a 23.7 per cent reduction in average apartment sizes, followed by Chennai at 22.2 per cent and Pune at 7 per cent.

Average unit sizes in Mumbai and Pune have been among the lowest across all four cities in 2010 and today. The configuration – e.g. two-bedroom-hall-kitchen – remains the same, but developers have reduced the area to make it much more compact.

A possible reason behind this move by developers to reduce apartment sizes could be to better suit buyers’ spending power. Also, many urban buyers are willing to live in newer and smaller-sized homes near their offices. They prefer to compromise on their residential lifestyle by having a compact home equipped with all the basic amenities instead of spending time on long commutes.

Developers can generally change apartment sizes prior to completing the foundation on the ground without hassles from the plan-sanctioning city agencies. A price correction, on the other hand, is very market-driven. This is a good move by developers, as they have been able to reduce prices and keep the configuration unchanged, despite rising construction costs, approval and finance costs eating into their profits, by reducing unit sizes.

Eco-sensitive zones to be cleared by March: Prakash Javadekar