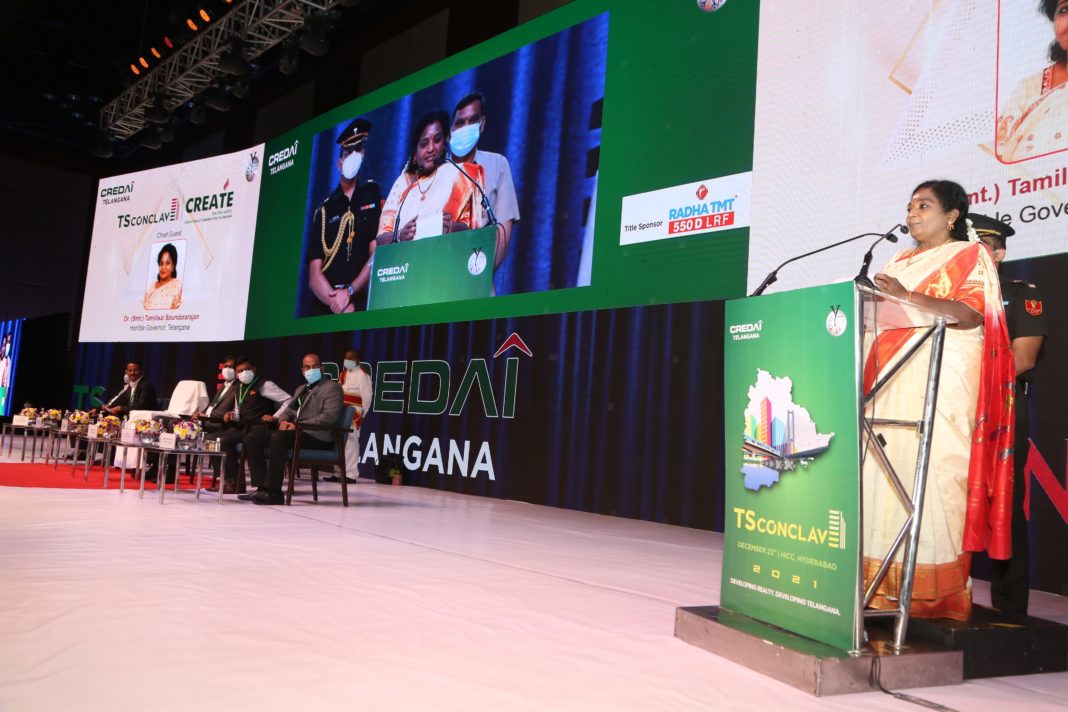 The goal of CREDAI TS CONCLAVE – 2021 is to educate the builder community in the state’s 14 chapters and 800 members on Standard Operating Procedures (SOP’s) and checklists to ensure adherence to the mandated norms. Abook developed by CREDAI Telangana on SOPs by Arvind Kumar, Special Chief Secretary, MAUD, Govt of Telangana, to be followed by members was unveiled at TS Conclave followed bya session on Government policies for real estate. Jayesh Ranjan, Principal Secretary of the Industries & Commerce (I&C) and Information Technology (IT) Departments of the Telangana Government, delivered a speech on Telangana – Equipped for the Future; Setting and Surpassing Benchmarks, and released a report on Telangana – A state on the move by ANAROCK, a real estate consulting firm.  It was followed by a panel discussion on Innovation and Technological advancement in construction technology, chaired by Dr. Ramana Rao, JNTU to assist members leverage them for more efficient construction. Final session was organized with a panel of leading banks to  discuss the nuances of Project finance and Home loans.

Speaking on the occasion Ch. Ramchandra Reddy, Chairman, CREDAI Telangana said, “CREDAI  being the voice of real estate industry’s collaborates closely with the government in the development of real estate policies and guidelines at both the state and national levels. Telangana has been in the forefront of real estate reforms, with initiatives such as TS-bPASS, a single-window approval process for real estate developments, and ‘DHARANI,’ a government-run integrated land record management system. This has sparked expansion throughout the state, increasing demand for real estate projects. It is not far to foresee that the state of Telangana will soon be a preferred destination for businesses across the sectors and people from far and wide will look to make this state their home.”

D. Murali Krishna Reddy, President, CREDAI Telangana said, “In the fiscal year 2020-21, Telangana added 46,489 new employments in the IT sector, with a 2.5-fold increase in indirect job creation. Over 1.5 lakh employment were also created in the electronics industry. To bring in investment opportunities and encourage the growth of start-ups across the state, TSIIC has created 10 Industrial Parks and granted 810 acres to 453 enterprises. Telangana now accounts for 5% of the national GDP and is India’s second-largest exporter of information technology. In the fiscal year 2020-21, the state saw a 13 percent increase in IT/ITeS exports in the country, reaching a new high of INR Rs 1.45 lakh crore, up from Rs 1.28 lakh crore the previous year. The demand for real estate in the state has risen dramatically as a result of this.”

According to E. Premsagar Reddy, President-Elect, CREDAI Telangana, “The state’s overall development has resulted in a higher need for more real estate projects. A number of new people have taken advantage of this opportunity to get into real estate. These new players frequently sell UDS / non-RERA certified projects due to a lack of awareness and understanding, generating unwelcome disruption in the real estate market. We hope the book on SOP’s released at the TS-CONCLAVE will help as an effective checklist for the developers to ensure compliance to all the required guidelines by the Government while undertaking a project.”

Elaborating about the TS-CONCLAVE K. Indrasena Reddy, Secretary, CREDAI Telangana said, “Since the formation of the state, a steady focus has led to emergence of a strong IT, ITeS industry employing over 6.3 lakh people,  is now expanding to tier II cities like Warangal, Karimnagar, Nizamabad and others bringing about a decentralized growth. Pharma and health care sector has a received a major impetus with specialized clusters like Pharma City, Genome valley and medical devices park will further drive economic activity in the semi-urban centres of the state. Mega irrigation projects are helping drive the rural income and ensuring a rapid growth in the state. GDSP for TS has registered an average growth of 8.9% with lowest unemployment rate and steady growth and a per capita income being 1.78 times higher than the national average. The job growth in the state has been 7.99% in 2020-21 compared to the previous year and is expected to grow steadily. This will definitely cause a rapid increase in the demand for real-estate. We are hopeful that initiatives like TS-CONCLAVE will help equip the developers community across the state to be better-equipped to leverage the opportunities.”