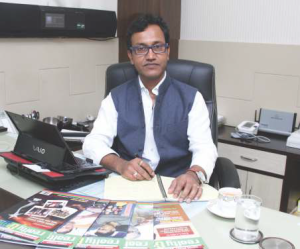 For the NCR-based real estate developers, it’s a period full of expectations. Besides the historic GST rollout, which the entire country is waiting for, and the upcoming RERA, they are gearing up to work under a new political dispensation. Yogi Adityanath, an untested and untried BJP leader, is the new CM of the state after the party came to power with a thumping majority and the developers have lots of hopes from the new Government.

As against the Left-liberal anti-Yogi discourse prevalent in some quarters, the industry is showing no such fears. For our Cover Story this month, we spoke to some of the prominent realty players operating in the region and they were unanimous in their appreciation of Yogi’s choice as the CM. The biggest advantage they are seeing is that with the same-party Government at the Centre and the states, there is going to be unanimity as far as policy decisions and the development agenda is concerned.

They are also happy that the new Government has made its realty focus evident with the CM taking stock of functioning of different authorities in the region. Noida MLA Pankaj Singh’s statement to punish those faltering in their delivery schedule has also been taken positively by most of the developers. They are equally excited at the proposed transformation that the real estate sector is set to witness with the setting up of a regulator and the rollout of GST in July.

The first signs of change we are talking about came with the change of guard carried out by the new Government at various development authorities operating in the region. While the most significant was certainly the exit of long-lasting bureaucrat Rama Raman from Noida Authority, there were other top-level changes at the Greater Noida, Yamuna Expressway and Ghaziabad authorities as well.

We are covering the entire rejig in a supporting story. Talking about the new scenario, we also caught up with Assotech Realty MD NeerajGulati to find in detail how much his company is prepared to handle RERA and the new taxation regime. It was heartening to learn from Gulati that because of the internal discipline being practiced for long in Assotech, the company is already over 90 per cent RERA-compliant. We have no doubt that majority of real estate players in the region are no less confident to adjust to the transformed scenario.

Keeping up with the practice we started with the last issue, we are reproducing three JLL India reports in the current issue. While one report talks about a huge market existing in the luxury housing segment, a related one deals with the role of architecture, particularly in high-end, luxury apartment. Another report dissects the post-GST scenario from the point of view of homebuyers and renters.

Besides all the news, analysis and research material, the April issue also contains the regular reads. Home loan rates of various lenders, property rates of various localities across cities, new residential launches in various cities, Vastu expert advice, this time on curtains, and, of course, your monthly horoscope by bejan daruwala.