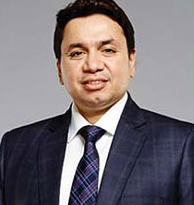 Having operated extensively in Haryana and now executing development projects in UP, Pradeep Aggarwal, Chairman of Signature Global, wants to stay focused on Delhi-NCR as of now. In an extensive chat with Realty & More, Aggarwal said for now, Signature Global will explore more and more possibilities in the Delhi-NCR region and at this point any other state is “secondary in our list”. Probed further as to what will be his favourites from that secondary list, he named Pune and Bengaluru. Seemingly contented with the success of his novel-concept mall in UP, Aggarwal is now gearing up for an affordable housing project in Rajnagar Extension which, he said, will be launched  somewhat around December. Giving details of the project, he said it will comprise about 2000 units and the company will try to keep the pricing around Rs 17-18 lakh to Rs 24-25 lakh. Besides sharing details about his maiden mall in UP, the Signature Global chief spoke to R&M about allotment system for the RNA housing project, his future plans in UP and his experience of functioning in UP and Haryana.

The following is the text of the R&M conversation with Aggarwal:

Realty & More: It has been quite some time that you opened a mall in UP. How has been the response so far?

Pradeep Aggarwal: The response has been very good, and there’s a reason for it. The mall has its own USP. I have not just made it as a centre of a shopping hub, but more of an entertainment zone. Instead of the traditional malls, where there are several brand outlets, we have preferably focused on having a place where one can only visit for entertainment purposes like dining, hotel, and related activities. There was no such place with this concept in UP. So that’s why people have shown a lot of interest to this mall.

There is a hotel in the mall, having nearly 80 rooms, which is being run by Clarks Premier. It’s a budget hotel, which is majorly demanded today. There is also a banquet hall, where one can host parties, and corporate events. On the ground floor, there is a section by the name of Food Quest where all the majorly known brands like KFC, Barista, etc. will be opening their outlets shortly. You will see all the well-known brands under one roof in the next two to three months. I feel that the other mall operators also might have to think about coming up with this concept.

R&M: Are there going to be any other brand outlets other than food and hotel-related?

PA: It all depends on which outlets we have tied up with. The brands which are on people’s fingertips, will definitely be seen at the mall. Once we are done with a successful deal with other brands, you will surely see them at the mall.

R&M: Are you doing this on sale model or leasing model?

PA: We only have the sale model. But, afterwards, we are getting the leasing done for the customers. The benefit of doing so, is that the customer cannot tap the quality of brand. The brands can easily settle down with the one-to-one approach. We believe that after doing all this, there can be a minimum guarantee and remarkable growth possible.

R&M: Talking about residential, you have an upcoming project in Rajnagar Extension. Are you going to announce it any time before Diwali?

PA: See, the mall was an entry for us in a big state like UP, where chances of facilitating affordable housing are very high. Taking this step further, we are launching a project in Rajnagar Extension, somewhat around December, of about 2000 units. The designing has been done by Hafeez Contractor. The quality of construction is same as what we’ve been doing in Haryana affordable housing projects. The project will be made using Mivan shuttering, because of which the quality will be high. Also, the ticket size and what our customer-centric approach has been, we will try to keep it around Rs 17-18 lakh to Rs 24-25 lakh.

R&M: How will the allotment be done in this?

PA: According to the UP’s Pradhan Mantri Awas Yojna, the price hasn’t been rushed. Only within a super area of about Rs. 3,000 can be sold. More than that is not allowed. Since, the company is launching its first project, and to convince customers regarding what they will be getting, we will try to get even better rates for them.

R&M: As you’ve been allotting through a lottery system in Haryana, will it be done the same way in UP also?

PA: Yes, it will be done through the lottery allotment, because the system is the same. Just as the Haryana Government organises the lottery whenever people apply for it, the same way in UP where people will apply through concerned firms. The Ghaziabad Authority officials will be conducting the draw.

R&M: You have been doing a lot of work in Haryana, and now started in UP. What is the difference between both the states, in terms of functionality?

PA: The developers, who’ve worked in a state for some time, find it comfortable there. For us, we have been working in Haryana for the last four to five years, so naturally we are comfortable, and hoping to be the same. However, UP being the largest state and having the majority of population has majority of possibilities as well. In UP, people usually talk about Noida or Greater Noida. Other than that, the NCR area isn’t really developed much. Because of the Pradhan Mantri Awas Yojna in the form of affordable housing, I think the areas of UP which fall under Tier-2 or Tier-3 have a big development possibility. Talking about the capital city Lucknow, there are high chances of development there as well.

R&M: So, are you planning to go to more cities in UP in the coming days?

PA: Like we have brought affordable housing in Gurugram, we also have tapped Sohna and Karnal. Similarly, today we have brought a project to Rajnagar Extension as an entry. In future, wherever we find the opportunity of having good land parcels, having a good location and having interest of people to buy, we will carry out our research model, understanding the needs of the people. If we are able to fulfil the same, then we will definitely tap more cities.

R&M: Any particular cities in your mind?

PA: Lucknow city is among the top in UP, the reason being, politics, high property rates and a lot of population. Awas Vikas has also made a lot of flats there. If we bring forward the scheme of the Pradhan Mantri Awas Yojna, there will be a lot of hand-to-hand buyers.

R&M: Any other state, apart from Haryana and UP, where you can plan for long term?

PA: For now, the focus of Signature Global is only in the Delhi-NCR region. As a businessman, and a company, we will always explore more and more possibilities. However, if at this point I’m asked whether I’m looking for any other state, it will be secondary in our list. Our first priority is Delhi-NCR.

R&M: Which will that secondary state be?

PA: Maybe Maharashtra, specifically Pune. It is a very good area, and replicates Gurugram. There is a very big IT sector and a very big automobile industry there. Secondly, Bengaluru is also one such city that is very good in terms of affordable housing. So, these two areas will be among my favourites, if I ever plan on bringing an affordable housing project there.