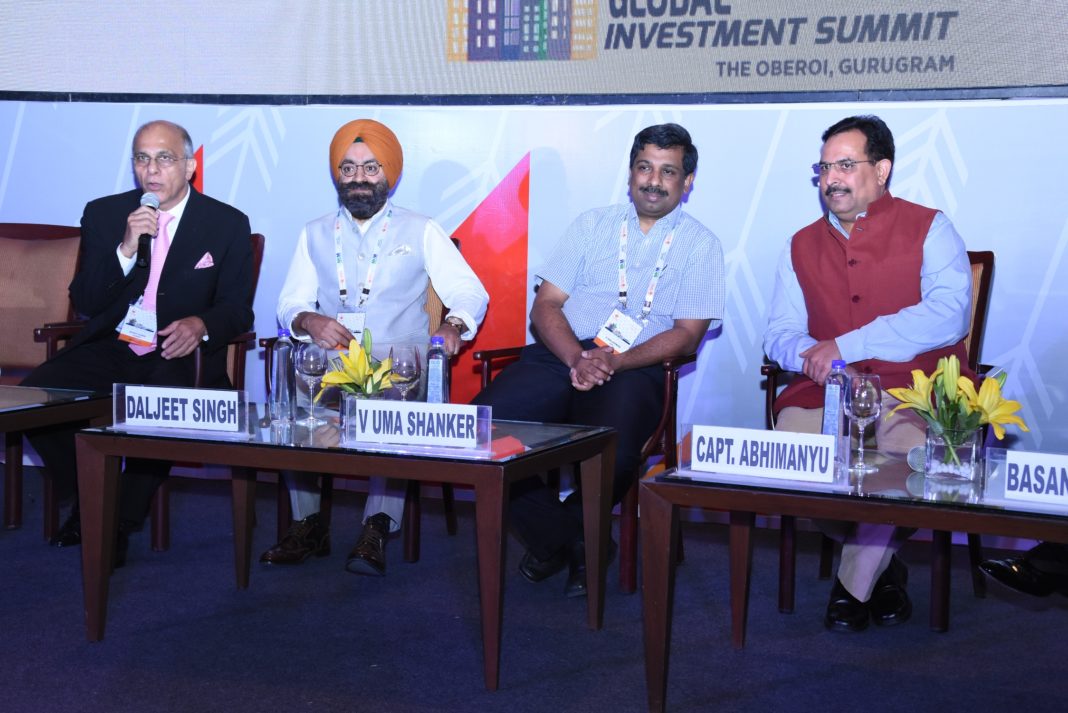 June 1, 2018, Gurugram: Minister of Finance, Government of Haryana, Capt. Abhimanyu Singh on Friday announced that the government would continue to handhold real estate developers and builders for the all round housing development including creation of affordable housing for masses not only in the State but the entire NCR.

The government would continue to chase and bring in best of policy framework for its infrastructural development provided the builders and developers indulge in collaborative efforts since the public transport requires huge funds and the state exchequer is not very well equipped with such funds and therefore, industry ought to pay its dues to the government to enable it release funds for public utilities such as housing, affordable housing and other civic amenities.

Addressing NAREDCO Haryana’s Global Investment Summit a Session on “Haryana Realty-Developing an Inclusive and Sustainable Realty Market” of Global Investment Summit under ages of NAREDCO Haryana here today, Capt. Abhimanyu Singh pointed out that the government has already put in place an integrated licensing policy and many other such policies for building suitable infrastructure across the State particularly in Gurugram but blamed industry for yet to avail of the benefits of such policy measures.

“A case in point is that of Rs.1,000 crores revenues that the state incurred in the last couple of months from real estate developers and builders, the share of Gurugram stood at meager Rs.300 crores whereas the rest of Haryana’s contribution has been to an extent of Rs.700 crore although the government focus more on the development of Gurugram”, he said.

Without being specific, the Finance Minister of State has been forthcoming saying that the state government in the last few years gave so much institutional support to the state’s real estate builders and developers and in return got lesser in proportion and therefore, appealed to the industry to come forward and make their dues payment in the form of stamp duty and other to the respective departments in the state.

Speaking on the occasion CEO, GMDA, Mr. V Uma Shanker also informed that the authorities in Gurugram are doing their best to expand and diversify its physical infrastructure in consultation with NHAI and other agencies yet it is finding difficult to decongest the city as per public aspiration and hoped that with emerging enthusiasm, the city of Gurugram would have improve traffic flows as soon as the Dwarka – Gurugram highways is opened up in near future and other highways in the state becoming operational.

Mr. V Uma Shanker also demanded that if Metro expansion has to happen in Haryana and particularly that of Gurugram, land acquisition applications for it should happen on DMRC Act rather than the prevailing land acquisition Act.

In his observations, Chairman, NAREDCO Haryana, Mr. Rajeev Talwar who moderated the Session sought to know as to by when the Gurugram’s physical and basic infrastructure would become that of global standards because the city itself has evolved on those parameters.

In his remarks, President NAREDCO Haryana, Mr. Praveen Jain observed saying that supportive policies towards real estate development in the state would be key prerequisite to ensure that housing becomes a reality for one and all.

Among others who were also spoke on the occasion comprised M3M India Pvt. Ltd., Mr. Basant Bansal; Advance India Projects Ltd., Mr. Daljeet Singh and others collectively sought state government support and pro active policies for the real estate development of the state without any flaws in the public policy documentation.

World Environment Day Green Buildings – An Imperative, Not a Choice

Government will shortly sort out problems of home buyers as well as builders in general and even RERA related, says Hardeep Singh Puri