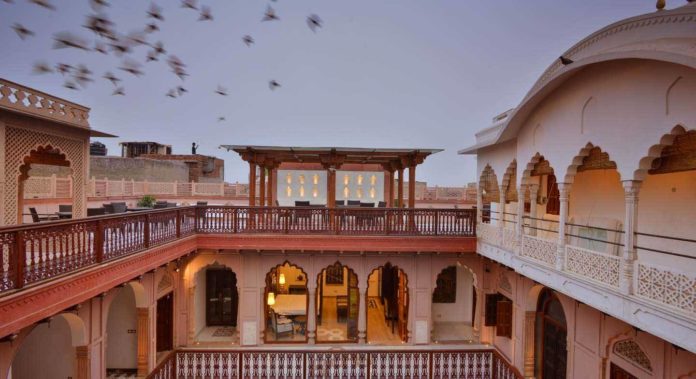 India’s vast cultural heritage is visible across the country, especially in the structures which were erected in different epochs. While many of the more notable ones have become heritage sites, many cities still have a number of private homes built in historic times that are no longer in use.

Some of these buildings are quite spectacular in their conception and execution, clearly reflecting the aesthetic preferences – and also architectural shortfalls – of bygone ages.

Haveli properties, which get their name from the ‘hawali’ (the Arabic word for ‘partition’ or ‘private space’) invariably have an interesting historical and architectural background. Many ‘haveli’ homes become local tourist attractions, but at least as many simply lie abandoned and are silently going to rack and ruin.

Of late, haveli properties are seeing a resurgence of interest from well-heeled buyers who sense an opportunity to secure a remarkable piece of history. As India accelerates headlong into the tech-driven age of modern conveniences, there is always a nostalgic yearning for what existed before. While there may be a hard business rationale involved as well, the underlying sentiment for such properties is a ‘reaching back’ to simpler and perhaps more dignified and even magnificent times.

In the decades before serious urbanization began and a formal real estate market took hold, spacious homes in many parts of India were the norm rather than a luxury. It was not only the super-rich who invested in building homes which are quite spectacular by modern standards.

Often, it is merely the land they occupy that is of interest. However, there are also many who seek to purchase such historic homes with a view to restoring them and putting them to active use – either as residences or as business establishments – with a view to preserving, as much as possible, the snapshots of historical ethos that they essentially are.

Buyers of heritage homes are usually ultra-high networth individuals who want to involve themselves, either as residents or as business owners, in and around prime locations with an old-world charm. In fact, going by many headline-capturing purchases in recent years, such properties are the new ‘must-haves’ of the ultra-rich. The phrase ‘old is gold’ is very much applicable to such properties.

Besides the growing interest in preserving architectural heritage, there is also a paucity of space in the prime locations of our cities. This inevitably increases the demand for iconic buildings which have historical relevance and/or a unique location advantage. Simultaneously, despite the creative efforts of some developers, there is also a dearth of contemporary properties with historic charm.

Many pure philanthropists buy haveli properties primarily to preserve a slice of history for future generations to behold and appreciate. However, the complete absence of an underlying business plan is rare.

Converting old iconic buildings into contemporary spaces (without subtracting too much from their historical appeal) is an established norm. There have been several instances where old buildings have been refurbished into office spaces, retail outlets or even residential spaces, and the hospitality industry puts a premium on restored or preserved haveli homes of sufficient size.

Many previously derelict spaces are now serving as artists’ ateliers across all segments including co-working spaces. For instance, the Ministry of New – a co-working space opened in 2016 at Kitab Mahal on D.N. Road – has infused new life into a building that was crumbling away in Mumbai’s Fort district.

Similarly, Spanish brand Zara opened its flagship store in the 111-year-old Ismail Building at Mumbai’s Flora Fountain Circle. These are good examples of heritage spaces being revamped for contemporary use.

It is a case of increasing demand for very limited – and non-replenishable – supply. Haveli homes exist where they have always existed and can only become rarer.

Where to Find Haveli Homes

Heritage homes can still be found across the length and breadth of the country, in cities like Mumbai, Delhi, Kolkata, Jaipur, Mysore and Jodhpur, but also in Goa, in old cantonment areas of defence-centric cities like Belgaum and Pune, and in hill stations like Mussoorie, Simla and Kodaikanal.

While many such structures date back to the British times, others also predate India’s colonial past. Unlike modern concrete structures which come with an ‘expiry date’, these homes were built to withstand the vagaries of time and weather in a tropical country indefinitely.

The major appeal of haveli homes in large cities like Mumbai or Kolkata obviously lies in the fact that these cities are space-starved in their central locations. In other cities like Jaipur, Mysore or Jodhpur, they can have considerable historical significance.

To attract interest, the size of such a property needs to quite large with a minimum size of around 25,000 sq. ft. area. The selling price will obviously involve its size, age and state of repair/disrepair, but the main criterion is the city and the exact location. In a land-starved city like Mumbai, the asking price can go beyond $50 million.

However, the trickiest part is that a buyer’s financial commitment does not end with the purchase.

Restoring and preserving a haveli building can extremely capital-intensive as it requires expert services. In most cases, restoration work is done after the purchase, and the valuation of the property and its final selling price will also depend on the amount of restoration work it requires. If a property is seriously dilapidated, it will certainly require more than just a face-lift.

Some of the inherent challenges:

The sale of such property usually has a long gestation cycle due to its unique features and the various factors that need to be considered. HNI buyers tend to know what they’re doing and invariably examine such a property minutely, both structurally and from a legal point of view, before deciding to invest in it.

This makes heritage properties a ‘market segment’ that requires a lot of patience on behalf of the seller. Most mainstream property brokers will not deal with them because finding the right client who is convinced about the value of the property and its distinct appeal is an uphill task.

Not least of all because a broker needs to be armed with granular knowledge not only about the property itself but also about the target clientele’s motivations. This knowledge then needs to be woven into a highly customized sales pitch.

Latest trends in residential sector at the time of COVID-19

From here on India’s realty looking up

We can also lend our voice if there is a delay...

Why Supermarkets Are on a Shopping Spree