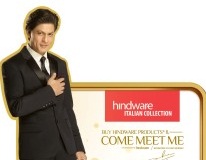 Bathroom products brand Hindware on Monday announced a nationwide ‘Blockbuster Celebration’ consumer campaign which will be on till mid-December.’

The campaign not only promises to give 12 lucky winners a chance to meet the ‘King of Bollywood’, Shah Rukh Khan but during the entire campaign period, consumers have a chance to win other grand prizes also.

According to a press release, an assured prize of a silver coin worth 10 grams is guaranteed once on a purchase of Rs20,000 worth of Hindware products (sanitaryware, faucets, showers, accessories). Simultaneously, there will be weekly assured prizes of gold coins for six dealers from six different zones.

At the conclusion of the campaign, winners will be announced through a lucky draw for the grand prizes, which include a Hyundai i10 car, five Honda Activas, five Apple iPhone 6s, five LED TVs and 20 iPod Shuffles. A social media contest will also be running during this promo.

Manish Bhatia, President, Building Products Division, HSIL Limited, said, “Our aim is to continuously engage with our consumers and channel partners to build strong relationships. We are the first player in this category to launch this innovative campaign and I am sure Hindware Blockbuster Celebration will bring joy to them.”

The blockbuster announcement will be made in January 2016 where six lucky winners (five offline purchase + one social media contest winner) and six dealers will be announced, who will win a chance to meet the actor.