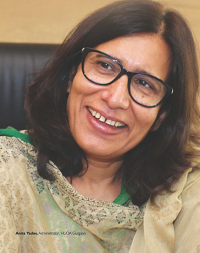 Traffic problem being the bane of Gurgaon, the authorities concerned cannot be immune to it and surely they aren’t! In this exclusive interview, Anita Yadav, Administrator of HUDA, Gurgaon, shares with Realty & More Editor Palash Roy a slew of steps that HUDA is taking to end this menace. Besides, the affable bureaucrat opens up on water problem, affordable housing, land problem, Rapid Metro and a host of infra-related issues which matter the most for the city in line for the ‘Smart’ status. While being candid about the multiplicity of authorities delaying infrastructural projects in Gurgaon, Yadav is proud of the achievements of HUDA across sectors.

Palash Roy: What is the roadmap that you have set for urself?

Anita Yadav: The focus of the state Government is to make Gurgaon a Smart City. Issue relating to infrastructure improvenment, sanitation, solid waste management system, piblic transport and efficient power infrastrue are pre-requirements to achieve the status of a Smart City. All the efforts are being made in this regards.

PR. What concrete steps have you taken to address infrastructure related issues and what more you plan to do for the same?

AY. The important issue in Gurgaon is of traffic problem. The model of urbanization in Gurgaon has been redesigned and as per the requirements challenged by the increased agglomeration, road infrastructures have been improved with widening in 90 km, new links in 75 km, redesigning of intersection, traffic management and pedestrian footpath etc. in 85 km have been improved in Sectors.Parking demand is also huge in Gurgaon. Multilevel parking in Sector 29 is being planned to relieve tremendous traffic. The congestion witnessed at crossing of NH8, Gurgaon, underpasses with proper signal-free movement are proposed at Rajiv Chowk, Signature Tower and Iffco Chowk. A flyover at Subhash Chowk on Sohna Road is already under completion. The area from NH8 up to Sector 55-56 is densely populated, thereby leading to traffic problem. A 78-metre wide master road, including nine-meter service road on both sides is being upgraded from NH8, to Sector 55-56 and provision of underpass/FOB and cycle track etc. The road cross-section in new Sectors from Sector 58 to 115 has been designed keeping in view the modern requirements with provisions of wider road surface of 14 metre lanes for two sides. External storm water drainage system has been completed in Old Gurgaon Sectors. The open outfall drains have been approved for construction underground with RCC box drain. Similarly four open creeks and carrier drain along Chakkarpur Bundh have been planned for channelisation. The external storm water in Sectors 58 to 67 and 81 to 115 is being provided and external SWD for Sector 68 to 80 will be provided after acquisition of land. 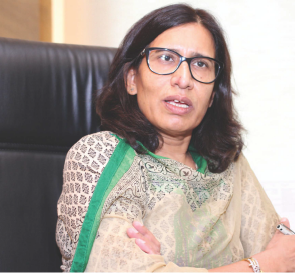 PR. What steps have you taken on NGT directive on construction?

AY. In pursuance of directions issued by NGT, meetings were held from time to time and the EOs, SE-I & II, SDE were directed that the orders passed by NGT be followed meticulously. The orders of the NGT have been hosted on the website of HUDA for strict compliance. Necessary provision has already been incorporated in the tenders/contracts for compliance of NGT orders in letter and spirit.

PR. Have you developed any mechanism to monitor that developers are following the NGT directive?

AY. Yes! In pursuance to the directions of NGT, notices to the construction sites along the Golf Course Road have been issued for necessary compliance and the sites are being visited by District Town Planner for strict compliance of the order. A directive has also been issued to the Regional Officer, Pollution Control Board, for strict compliance of the abovementioned order as the noise, air and water pollution etc. are being monitored at their level.

PR. Do you think the NGT is being extra harsh in some of its actions, which is causing blockages in developmental work?

AY. The orders passed by the NGT, by and large, are in the interest of public, subject to the fact that no legal right sare infringed.

PR. Do you in any way ensure that buildings made in your jurisdiction are earthquake-resistant?

AY. While seeking approval of building plans of high-rise structures, the developer is required to submit a certificate wherein the architect as well as a qualified structure engineer certifies that the structure has been designed in accordance with the provisions of the National Building Code and the

relevant Indian Standard Codes (with latest amendments), including Indian Standard Codes for structures resistant to earthquakes and other natural hazards. The same is further certified by proof consultant in case of high-rise structures. Again, for grant of Occupation Certificate, a certificate is submitted by the developer, wherein the engineer as well as the architect certifies that work has been supervised by them and has been completed to their satisfaction in accordance with the sanctioned building plans and its structural design. The workmanship and all the material used for construction have to meet the specifications laid down in the National Building Code. Also, the Director, Town & Country Planning Department has proposed a third-party inspection of the buildings of height 15 metres and above in NCR, especially Gurgaon and Faridabad, to ensure compliances regarding National Building Code on earthquake-resistant buildings.

PR. What have you done to make HUDA more people friendly?

AY. All the officers of HUDA frequently visit their respective areas and hold meetings with the resident welfare associations of the Sectors to know their grievances and that builds inter- personal relationship between the residents and the officials. Meetings are also conducted at the level of Administrator to redress the grievances of the RWAs. HUDA has also initiated projects which involve active participation of the RWAs, for example some RWAs of HUDA sectors have been given the responsibility for maintaining the sanitation and maintenance of the parks. The allottees can visit the HUDA website and can have their password for getting the up-to-date information of their individual plots, including online process. The policies and instructions are hosted on the website for the convenience of allottees. The allottee may get information online regarding his plot status, transfer status, completion and account statement etc. 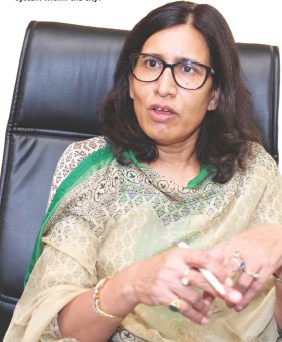 PR. How much of the citizen services of HUDA are IT enabled?

AY. Services like plot and property management which includes transfer of plots, issue of possession certificate, DPC Certificate, approval of building plan, issue of occupation certificate, nodues certificate, mortgage permission etc. are being carried out online. CM Window, Har Samadhan and HUDA Helpline have been started for the grievanceredressal of the residents.

PR. How much of HUDA land is encroached and what are you doing to free it?

AY. Till date HUDA has acquired 14,762.73 acres of land in Gurgaon out of which 588.22 acres area is under encroachments. HUDA has prepared schedule to carry out encroachment drives so that the land could be utilised for development purposes.

PR. How much amount is lying unspent with HUDA? Why the same is not being spent for infrastructure development-related work?

PR. What new Metro Rail routes are being planned in Gurgaon?

PR. What is the status of the Rapid Metro Rail?

PR. How successful has been the Rapid Metro model?

AY. Rapid Metro model has been a success in terms of public transportation. People of Gurgaon have welcomed this move as it gives connectivity from Delhi Metro and provides safe and comfortable mean of commutation in Cyber City area., However in order to make it a sustained successful example of PPp, to be followed elsewhere, further concession/support shall be required from authorities/Govt. The means of support can be in the form of ToD rights, free land- use, VGF from Government.

PR. Is it true that the traffic till now has been much less than what was estimated?

AY. Yes! Against the projection of more than 1.5 lakh passengers per day, Rapid Metro is currently getting traffic of around 22,000. There is huge gap in estimated and actual ridership. It is due to competing mode of transportation (like shared auto) on the same route which defeats the purpose of Metro.

PR. Apart from the Metro Rail and Rapid Metro, do you have any other plans to improve the transport system within the city?

AY. Yes, planning is in progress to provide connectivity to Old Gurgaon. Alignment has been discussed with HUDA and Rapid Metro is awaiting further details on the project.

PR. What is the earning figure of HUDA from External Development Charge (EDC)? What portion of that is really being spent on development?

AY. The figure of External Development Charges (EDC) spent on development at Gurgaon is RS. 3,84,606.75 lakh up to March 2015. The figure is maintained at Head Office level. 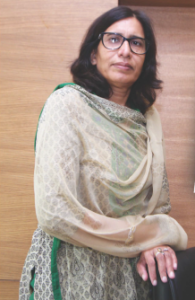 PR. How has been the response to the state Government’s affordable housing plan and what has been the impact of the revised land acquisition Bill?

AY. The affordable housing policy was notified by the Government to ensure increased supply of affordable housing in the urban housing market to the deserving beneficiaries. The minimum and maximum area for such projects is 5 acres and 10 acres respectively and the carpet area of the apartments ranges from 28 sq m to 60 sq m in size. There has been tremendous response to the scheme and the allotments are made on draw basis.The affordable housing scheme is on self-acquired land by colonisers and not on the land acquired by the Government and hence the revised land acquisition Bill has no bearing on the same.

PR. Is the Government planning something more on affordable housing?

AY. There is no further intimation from the Government on this as of now.

PR. Over the years Gurgaon has been losing its edge over other NCR towns such as Noida, due to poor infrastructure. What are you doing to address that?

PR. What are you doing to address infrastructural issues such as water clogging during rains and poor power situation?

AY. Instructions have been issued to the engineers concerned to desilt all the drains. We are also constructing and cleaning rain water harvesting structures for efficient recharging of the groundwater.

PR. Does developmental work get hampered due to multiple authorities in Gurgaon?

AY. No. Because inter-departmental review meetings are conducted time to time at the senior level, which helps us in smooth functioning of work. As a result there is no delay in implementation of projects.

PR. What steps are you taking to address drinking water problems in Gurgaon?

AY. HUDA has started treatment of sewerage waste water upto tertiary treatment and same will be utilised for construction, horticulture and flushing in toilets purposes, thus reducing the considerable load on potable drinking water. The present capacity of tertiary treated water is 65 MLD and we are planning to increase it. HUDA has planned dual water supply system in New Gurgaon i.e. Sectors 58 to 115 and planning to utilize 30 per cent of demand of water supply from tertiary treated water. Also, HUDA is planning to construct more water treatment plants as the water demand increases on increase of population. The Authority has made it mandatory for every residential, institutional and industrial plot-holders to install rainwater harvesting pits to re-charge the ground water.