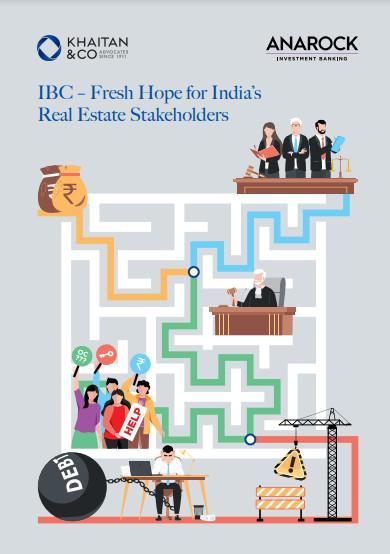 Mumbai, December 6, 2022 – Since India’s Insolvency & Bankruptcy Code (IBC) was implemented in 2016, 25,225 cases involving a total of Rs 10.5 Tn have been disposed of under its Sections 7, 9 and 10. A joint report by property consultants ANAROCK and law firm, Khaitan & Co points out that while real estate comprises just 5% of all cases under IBC, its resolution rate is among the lowest. On the other hand, IBC has driven superior value realisation by financial creditors in real estate – with this class of creditors realising 66% of the admitted claims as compared to just 31% of admitted claims realised in other sectors.

Shobhit Agarwal, MD & CEO, ANAROCK Capital, says, “The Insolvency and Bankruptcy Code has been very effective in helping lenders secure their dues in a much quicker timespan than witnessed earlier. Moreover, IBC has also delivered superior value realisation to Real Estate stakeholders compared to other industries. However, successfully resolving insolvencies and driving value realisation through this code requires adequate planning and a structured approach. We have touched upon some of these aspects in our report.”

One of the most important milestones in the evolution of IBC was an amendment which recognizes homebuyers as financial creditors. This means that homebuyers are now effectively considered at par with banks and other institutional creditors when it comes to recovering dues from real estate developers who have gone bankrupt.

IBC’s framework is designed keeping in mind a resolution timeline of 330 days. However, the time it takes for a resolution plan to be accepted is usually much longer than that. With real estate being a particularly vexed field for the IBC, the report finds that the way forward for resolving real estate developer insolvencies to ultimately benefit stakeholders including homebuyers is anything but smooth.

Sudip Mullick, Partner, Khaitan & Co says, “Given the complexities involved in the real estate sector, it is very challenging for the resolution professional to run the business of insolvent real estate companies and ensure completion of the projects. In this report, we discuss the best way forward for the efficient resolution of real estate projects which safeguards the rights of homebuyers and other stakeholders.”

Kumar Saurabh Singh, Partner, Khaitan & Co adds, “The insolvency resolution of real estate companies has its own challenges. Due to the involvement of various homebuyers in the real estate project and a high level of public interest, the courts have adopted a purposive stance to surmount the unique legal issues that emanate from the insolvency resolution of the real estate sector. The report outlines some of the recent developments and potential changes related to the IBC, including the IBBI’s recent amendments in the CIRP Regulations that allow the sale of assets in the CIRP of corporate debtors. This move is expected to eventually increase the efficiency of project-wise resolution in real estate companies. Having said this, the stakeholders including the financial creditors as well as home buyers need to work in a coordinated manner to bring the best outcome in the resolution process.”

The report takes a close look at the interplay between IBC and the real estate sector, such as key legislative developments within IBC impacting the sector, landmark judgments, the resolution track record in real estate v/s. overall resolved cases, and the time taken in various cases to resolve real estate insolvencies.