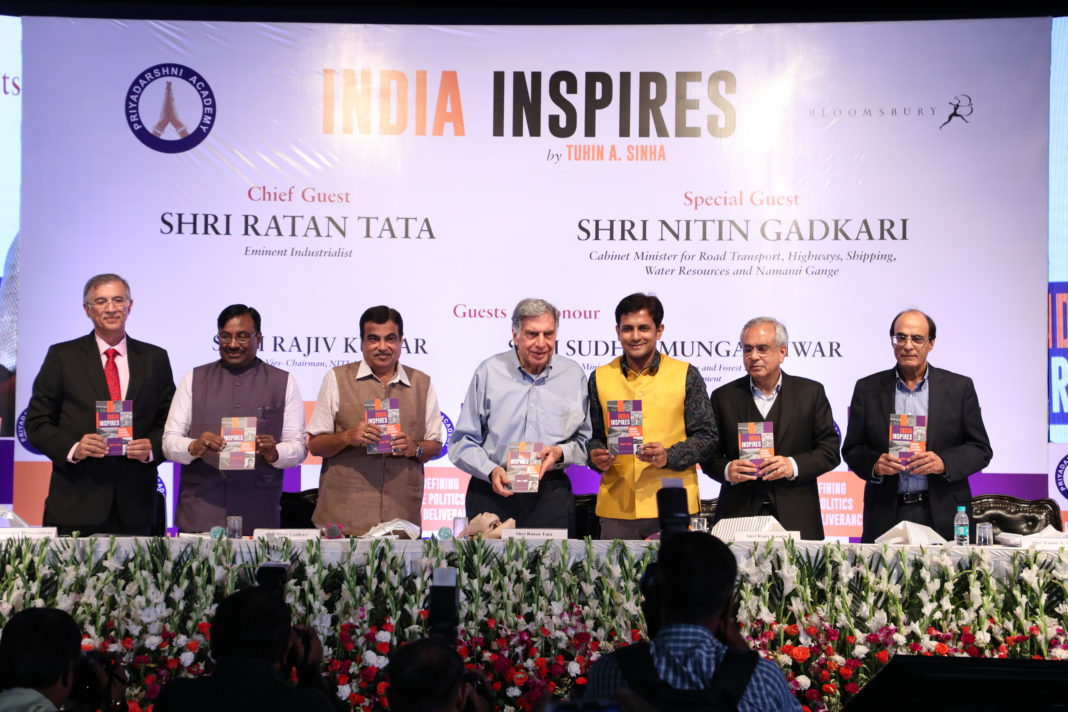 MUMBAI, 06 DECEMBER 2018: Priyadarshni Academy Chairman Dr. Niranjan Hiranandani who is currently the National President of NAREDCO; and President-Elect, ASSOCHAM presided over a glittering ceremony which saw the formal launch of a book which traces the journey of Shri Nitin Gadkari as one of the best performing ministers of the Narendra Modi led Government of India. The book, ‘India Inspires: Redefining the Politics of Deliverance’ by Shri Tuhin A. Sinha, was inaugurated at a glittering ceremony, which saw the who’s who of India in attendance. The event was held at Rangsharda Auditorium, Mumbai on December 06, 2018.

Priyadarshni Academy is committed to honoring real achievers who have left an indelible mark on society through their meritorious efforts and services, and Shri Nitin Gadkari is among the most efficient ministers of the present government, said Dr. Niranjan Hiranandani. His work speaks for itself: from an average highways road construction pace of 3 km/day in May 2014 when he took over, under his tenure this figure now stands at 27 km/day. The National Highways, earlier a stretch of 96,000 km, is now in the process of being expanded to double the length. An unprecedented number of new expressways have been launched, whereas important highways whose construction had been stalled for years have now seen the light of the day.

In the shipping sector, under the ambitious Sagarmala Project, the government is developing port infrastructure along the country’s 7,500 km coastline. The project includes modernization of the ports and islands and the creation of coastal special economic zones. In his new ministries—Water Resources and Ganga Rejuvenation—Shri Nitin Gadkari has infused new energy with path-breaking initiatives around the interlinking of rivers and expediting the cleaning of Ganga.

If one takes into account the sheer magnitude of cumulative infrastructure development work undertaken by Gadkari’s ministries over the last four years, it is nothing short of an infrastructure revolution, said Dr. Niranjan HIranandani, adding that this book has author Tuhin A Sinha provide a rare insight into the working style of the Hon’ble Minister, besides detailing how these ministries are silently and crucially fuelling Prime Minister Narendra Modi’s dream of a New India.

Responding to the positives and laudatory comments on his success, the Hon’ble Cabinet Minister for Road Transport, Highways, Shipping, Water Resources, and Namami Gange Shri Nitin Gadkari said, “Under our dynamic Prime Minister Shri Narendra Modi’s leadership and vision, the country has taken unprecedented strides in the roads and shipping sector in the last four years. Ganga cleaning and new irrigation projects have also been launched with the zeal and commitment never seen before. In this book, Tuhin Sinha documents our inspiring infrastructure journey of the last four years. I hope this journey sets a new benchmark for the future.”

The book, ‘India Inspires: Redefining the Politics of Deliverance’ by Tuhin A. Sinha, has been published by Bloomsbury Publishing.