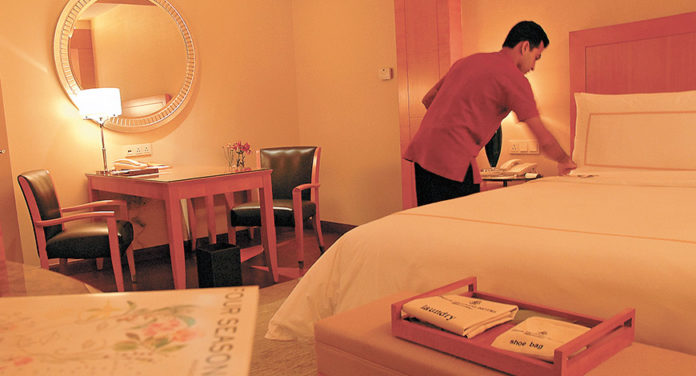 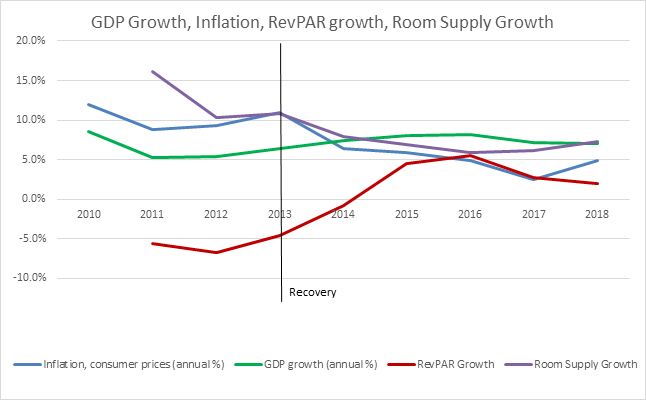 After the global slowdown in 2008-09, whilst the world around us was recovering slowly, Indian economy was suffering from its policy paralysis under the second UPA regime. Around that time, Hotel Industry was also going through a low phase, wherein RevPAR (Revenue per available room) witnessed a negative growth rate of -6.7%. In 2014, with a new majority go vernment under NDA, the economy started displaying signs of recovery with an increasing GDP growth rate and an increasing rate of inflation implying a growth in consumer demand. Hospitality industry also entered its recovery phase at the same time on the back of growing demand and declining growth in new hotel supply.

Between 2014 and 2016, the economy grew by an 8% GDP growth rate and the hospitality industry enjoyed a growth in RevPAR growth of 5.5%.

Towards the end of 2016, post demonetisation, th e economy started showing signs of slowdown with a drop in GDP growth rate brought about by contraction in domestic and foreign consumption. Stressed NBFC banking sector and the stress in Agriculture sector further decelerated growth.

The impact was very visible on the hospitality sector too. RevPAR growth dropped from 5.5% in 2016 to 1.9% in 2018. The issue in the last three years was two-sided. On one hand consumer demand dropped and on the other, supply continued to grow, which outpaced demand, at least in a few markets such as Pune and Ahmedabad.

It is important to note that although supply growth affected the hospitality industry during this time, it also displayed the positive investment sentiment that existed with regard to this asset class. This was largely due to the optimistic growth in the services sector in major business cities of the country.

The economic scenario in 2019 has further declined with the GDP growth rate reaching its all-time low of 5 % in the first quarter (Q1, April-June) of fiscal year 2019-20. Inflation levels have also dropped in Q1 2019-20 as compared to Q1 2018-19, which indicates slow consumer demand.

On the contrary, for the hospitality sector, we observe that RevPAR has grown by 2.6% over the last year. This deviation from economic behaviour can be attributed to the commercial real estate market, which has witnessed a 20% growth in office stock absorption and 1% decline in vacancy rates across the top seven business cities in India. This gives the hotel industry hope in 2019 moving into 2020, so long as the services sector continues to drive growth in the commercial office market in major cities.

The positive outlook of the government on revival of GDP growth and maintaining inflation at targeted level gives the economy as well as the hospitality industry a ray of hope. With the latest reduction of GST from 28% to 18% applicable on room rates above INR 7,500 per night will provide a great fillip to the premium and luxury hotel sector.

Also, the significant reduction of corporate tax will strengthen the investor sentiment. We also believe the economic environment is becoming more conducive for growth in the long term. Room night demand wi ll grow in major business cities as well as in the leisure destinations and this demand will drive the growth in hospitality industry.

Caution: Skills shortage could slow down the realty sector

R&M Property Awards in The Pioneer