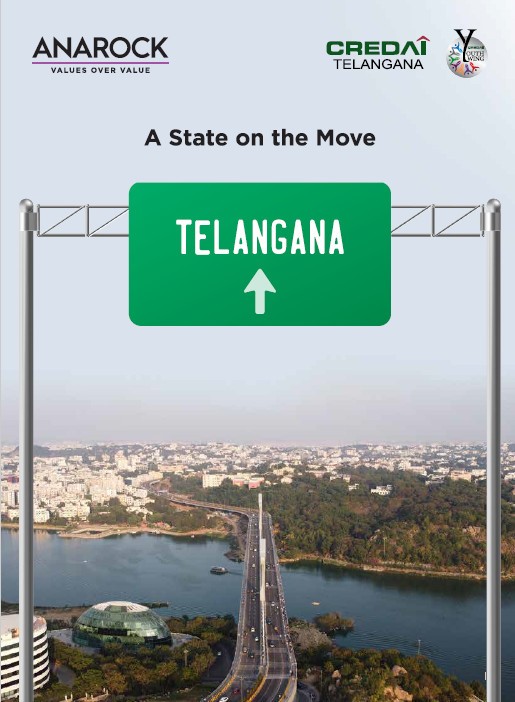 Hyderabad, December 23, 2021: Telangana, India’s youngest state, has grown exponentially since its formation in 2014. A vibrant IT/ITeS sector and robust infrastructure development are prime growth drivers in the state, reveals the CREDAI-ANAROCK report ‘Telangana: A State on the Move.’

With a strong presence of large IT/ITeS companies, the state witnessed Rs 1.5 Lakh Cr worth IT exports in FY 2020-21 – a 12.98% rise against the preceding year. Telangana witnessed 2.21 times growth in IT/ITeS exports compared with the national average. More than 6.3 Lakh employees are presently working in the state’s IT/ITeS sector.

Various IT/ITeS companies are casting their nets beyond Hyderabad, exploring Tier II cities like Warangal, Karimnagar and Nizamabad as alternate IT/ITeS hubs. These cities offer cheaper land, sound infrastructure, and a strong talent pool emerging from many professional colleges there. Companies like CYIENT and Tech Mahindra have already opened their offices in Warangal.

Prashant Thakur, Sr. Director & Head – Research, ANAROCK Group says, “Currently, IT/ITeS activities are largely concentrated at Gachibowli, Madhapur, and Nanakramguda in Hyderabad. However, COVID-19 changed the working dynamics for the sector as WFH gained universal acceptance and adoption. This may lead to the decentralization of IT/ITeS companies from tier I to tier II cities due to the latter’s’ rich talent pools. Various companies are already exploring Warangal, Karimnagar, and Nizamabad as the next IT/ITeS destinations.”

Another key growth driver in the state is the sustained physical infrastructure development in the past, and multiple upcoming mega projects. These include the expansion of the railway network, greenfield and brownfield airports, industrial corridors, the Regional Ring Road, and Metro rail corridors that will unlock the future potential of new markets and cities.

“Telangana’s real estate market is set for growth on the back of sectoral development across the state,” says D. Murali Krishna Reddy, President – CREDAI Telangana. “Demand and supply have already attained equilibrium in Hyderabad. The state’s strong fundamentals and robust infrastructure support the immense potential of the sector. The planned Regional Ring Road and the industrial corridors will unlock new land parcels in the adjoining districts and boost overall economic development.”

The large base of MSMEs provides many opportunities for industrial development. As many as 13,379 MSMEs have been registered in the state since 2014. Medchal-Malkajgiri, Sangareddy, Rangareddy, Karimnagar districts account for most of the state’s MSME units, investments, and employment.

Backed by robust infrastructure, this sector will create abundant direct and indirect employment opportunities and thereby generate demand for affordable and mid-segment housing across the state.

The future of co-living in India – Colliers