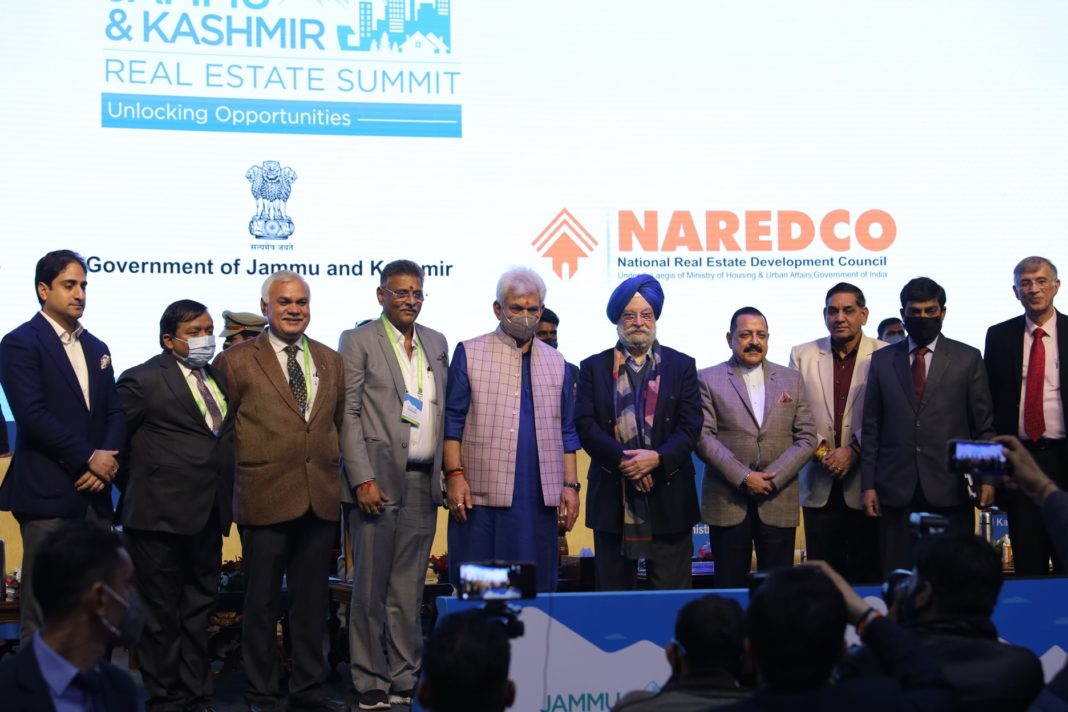 Jammu, December 27, 2021: Lieutenant Governor of Jammu and Kashmir Manoj Sinha on Monday predicted that it is likely to receive close to Rupees 60 thousand crores of investment in Real Estate sector in very near future since the Govt. of the day has top priority to transform this sector which would have multiplier effects on the UT’s economy.

Addressing Jammu and Kashmir Real Estate Summit 2021, jointly organized by Ministry of Housing and Urban Affairs, Government of India, Govt. of Jammu and Kashmir and NAREDCO here today, the Governor indicated that investment proposals worth Rs. 44thousand crores with their detailed project reports have already been submitted to the concerned departments of the Govt.

Hon’ble LG also announced that given the success of the Real Estate Summit 2021 at Jammu, the Govt. is so encouraged to seeing the response of investors that it would host similar conference on 21st and 22nd May 2022 at Srinagar and make it even larger at scale. He further assured that the necessary steps will be taken to rationalize the stamp duty rates on the lines of other State who reduced or waived the stamp duty for certain period.

Hon’ble LG informed that multiple projects relating to infrastructure of around Rs. 1 lakh crores of investments are at various stages of implementation in the entire Jammu & Kashmir region and added that shortly with the help of Central Govt., the Union Territory will be able to launch the metro projects in both major cities ‘Jammu & in Srinagar’. Besides the Lt. Governor also informed that “the present Govt. is building a central secretariat and dwelling units for state employees including those that work for police force. It is also moving very fast to creating infrastructure such as hotels, parks, IT hubs, and more”.

During the occasion a ‘Coffee Table Book’ was also launched which contained information relating to the Union Territory and MoU’s were signed for over Rs. 18 thousand Crores of projects in various areas of economy. During the occasion, Auction Portal and Auction of Assets portal were also launched, besides the RERA portal under the provision of Real Estate (Regulation and Development) Act, 2016 [RERA] was also launched in the presence of Union Minister of State at PMO Dr. Jitendra Singh and Union Minister of Housing and Urban Affairs and Minister of Petroleum and Natural Gas Mr. Hardeep Singh Puri.

Speaking on the occasion Puri thanked the Lt. Governor of Union Territory of Jammu and Kashmir for taking up developmental projects for its people in such a short span of time and created an atmosphere of friendly industry related policy on multiple front. The Union Minister particularly emphasized on drastic reduction of the rates of civil aviation fuel including massive rationalization in stamp duty structure for the real estate.

Union Minister of State for PMO Dr. Jitendra Singh who also participated in the conference informed that ever since Modi Govt. has come to power from 2014 onwards, the development and its pace was accelerated in entire Jammu & Kashmir, the development of which was neglected by the earlier regimes.

Both Puri and Dr. Singh urged the administration of Jammu and Kashmir to ensure that whatever investments flocks in this region, should have the local partnership of its trade and commerce and host of other such participants.

Speaking on the occasion President NAREDCO India Rajan Bandelkar urged that NAREDCO would do its best to make proposed May 2022 Real Estate Summit in Srinagar as the very best in all parameters and ensure larger participation for it. He also emphasized that the Central Govt. should come out with the policy measure so that the issue of Input Tax Credit related to Real Estate is sorted out in the sense that those developer who wish to go through this route may go or else who choose to deviate from it.

Vice Chairman, NAREDCO India, Dr. Niranjan Hiranandani in his address sought that the Jammu & Kashmir administration should focus on mixed used township development as its top priority, and seeks participation from industry stakeholders. This will enable Union Territory to move up on the path of growth in an equitable manner with a win-win situation for each participant.