The following is the report by Ramesh Nair, COO – Business & International Director, JLL India on Mumbai residential prices grew by only 7 percent in two years.

The concerns about soaring rentals and unaffordable housing in Mumbai notwithstanding, the surprising fact is that residential property prices across Mumbai city and its suburbs increased only by 7 percent in 2014 and by a negligible 0.3 percent in 2013. Home prices in the financial capital are evidently not submitting to the inflation that is affecting the cost of living in most other respects. Of course, given the sluggish demand for homes owing to the already crippling prices, there is not much scope for appreciation.

In fact, the meagre increase in average property prices in the city stands in stark contrast to the general inflation rate of 6 percent in 2014 and 9 percent in 2013 (as per the CPI data). These figures definitely put paid to the popular perception that Mumbai’s developers keep increasing prices despite the fact that inventory has been building up and housing demand slowing down over the last couple of years.

Even the average hike of 7 percent was primarily due to the new development control (DC) rules that came into effect from 2013. Developers had to start paying for additional (fungible) FSI towards construction of lifts, lobbies, flower beds, balconies, etc., which had been FSI-free areas earlier. Other reasons behind the marginal increase in per-square-foot prices include the rise in ready reckoner rates and escalations in the cost of labour and raw materials.

The eastern suburbs from Kurla to Mulund saw an increase of 6 percent in 2014 over 2013 and 5 percent in 2013 over 2012 prices, as land was still available to launch new projects there. South Mumbai and western suburbs between Malad and Borivali recorded a similar price increase as their eastern neighbours.

Bandra, Khar, Santacruz and Juhu also saw average growth in prices, as these areas lack a good supply of high-rises. Rates in areas like Thane and Navi Mumbai did not grow much either, and the uncertainty surrounding Navi Mumbai’s new international airport did not work in favour of the satellite city. 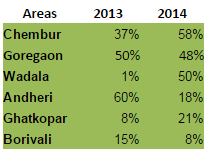 That said, Chembur and Wadala stood apart from this lacklustre trend in residential price growth. The two suburbs saw a tremendous price increase of 58 percent and 50 percent respectively in 2014 over 2013, thanks to completion of infrastructure projects like Eastern Freeway, which connects Chembur to South Mumbai, and the monorail, which was in the news recently for all the wrong reasons. 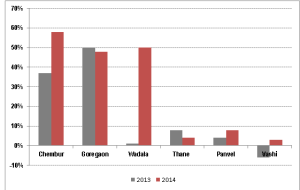