Maharashtra government’s new IT / ITeS policy is starting to help Navi Mumbai. After the introduction of this law, IT campuses currently in the blueprint stage and totalling an area of 3mn sq ft are expected to come up by 2019-20 in the Satellite City.

It is no secret that Information Technology (IT) has been the single-largest driver of job creation and urban development in India. No other industry has had such a massive catalysing effect on economic growth at the national and even regional levels. Real estate has generally been the fastest responder, with IT/ITeS more or less dictating commercial space creation and absorption in many cities, and even transforming hitherto barren regions around upcoming IT hubs into vibrant residential catchments that eventually command prime pricing.

In Maharashtra, IT/ITeS-spurred growth has to date been seen primarily in Pune, thanks to the city’s own high-grade demographic attributes. Though Navi Mumbai has received a fair share of the pie, it has to date not been able to do much with it because of the lack of adequate policy-level incentives. This is now set to change with the Maharashtra’s government’s new Information Technology / Information Technology Enabled Services Policy.

· Exempt IT/ ITeS companies from paying stamp and electricity duty
· Provide power to such units at industrial rather than commercial rates, along with additional subsidies on electricity tariffs
· Property tax at residential rates
· Exemption from octroi, entry tax and Local Body Tax
· Concessions on Works Contract Tax and VAT.

The state is also focusing on giving more FSI and other incentives to companies that set up units in Navi Mumbai and a few other cities where land cost is cheaper than in Mumbai. This could cause a surge in demand for commercial spaces in Navi Mumbai, with an obvious concurrent spin-off demand on housing. This stimulus could not come at a better time, since the satellite city currently has an unsold residential stock of around 1.25 crore sq ft (around 24,500 units).

So far, residential demand in Navi Mumbai is heavily influenced by the commercial market movements in neighbouring Mumbai and Thane. This may be a reflection of the market being an investor-driven one, in which case, it becomes all the more important that end-users come in at some point of time. However, this can happen only when commercial space absorption goes up like it did in Hinjewadi in Pune and Whitefield in Bangalore.

What Makes Hinjewadi and Whitefield Tick

The supply of office spaces in Pune’s Hinjewadi versus the supply of residential units confirms that developers initially saw this location primarily as a commercial destination, therefore concentrating almost exclusively on launching office projects. It is only when the rising demand for homes from employees working in Hinjewadi’s IT companies justified it that developers began launching residential projects there. Today, all areas offering relatively easy access to Hinjewadi are residential hotbeds.

A similar pattern of development was seen in Bangalore’s Whitefield, where the commercial market matured ahead of residential. In fact, Whitefield is a stellar example of how such an approach to real estate development can pay off. 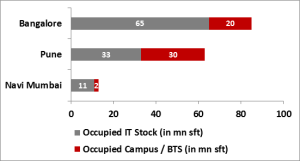 Interestingly, both Whitefield and Hinjewadi came up years after Navi Mumbai and yet successfully evolved into major IT hubs. Both were able to attract the best IT companies, and continue to see good demand for commercial and residential real estate.

Currently, Navi Mumbai has a poor IT footprint compared to Bangalore and Pune. However, it holds immense latent potential to emerge as one of Maharashtra’s most powerful IT hub. It has all the key attributes to make this happen, including:

· Superior infrastructure
· Close proximity to Mumbai, and
· A steady supply of qualified talent from its numerous educational institutions.

Although around 96 per cent of its office spaces are occupied by IT/ ITeS companies, Navi Mumbai has fallen short when it comes to branding itself appropriately. Thus, despite its indubitable advantages, corporates have not made been attracted to Navi Mumbai in the numbers witnessed in Gurgaon, Pune and Bangalore. 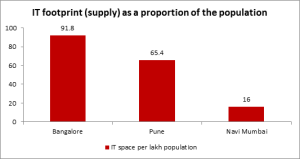 While demand for office spaces definitely exists, the lack of Grade A supply in Mumbai has prevented large corporates from moving their offices to Navi Mumbai. This has even more pertinence to IT/ITeS multinationals, which look for green, contemporary, energy-efficient buildings with verified safety and security specifications and large floor plates. So far, the right kind of Grade A office supply in Navi Mumbai has been delivered largely by Mumbai-based developers like K Raheja Corp, which has successfully leased nearly 7 million sq ft in their two IT park projects in Navi Mumbai to leading domestic and international IT / ITeS majors.

Though Navi Mumbai has limited high-quality buildings, Pune and Bangalore offer such companies a number of very attractive options. One dubious positive to this situation is that the Grade A offices that do exist in Navi Mumbai have seen sizeable rental appreciation because of the dearth of other options.

Now, with the announcement of the Maharashtra government’s new IT / ITeS policy, Navi Mumbai could defrinitely see a change in fortunes. After the introduction of this law, IT campuses currently in the blueprint stage and totalling an area of 3mn sq ft are expected to come up by 2019-20 in the Satellite City. And this is just the beginning; a surge in demand for commercial spaces or IT campuses is expected here. It does appear that the new IT policy can help catapult Navi Mumbai into the national IT landscape and help it increase its IT footprint.