Mumbai has got another wake-up call to relook at its exorbitant real estate prices. With average prime district office rentals falling by 4 per cent in 1Q15, Mumbai has performed better than only two cities in a global Jones Lang LaSalle survey. Only Sao Paulo and Moscow, with 5 per cent and 24 per cent depreciation respectively, fared worse in the comparison between central business districts (CBDs) of leading cities across the world. 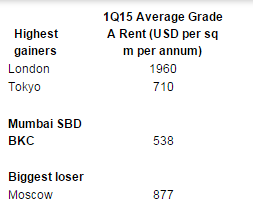 Brussels and Paris were the two other cities, which saw 4 per cent and 3 per cent depreciation respectively. Frankfurt was the only city that saw no change. London was the top performer at 12 per cent increase in rents followed by Tokyo at 7 per cent, Shanghai, Hong Kong and New York – all three at 4 per cent, Dubai at 3 per cent and Sydney at 1 per cent. The calculations are in local currencies and the report tracks only the central business districts (CBDs) across these cities.

Mumbai figures among those global financial centres that saw a fall in prices. Moscow and Sao Paulo, which are also financial centres of these emerging economies, are in the red. Among the mature economies, only Brussels and Paris figure in the red while Frankfurt sits on the borderline. Most other cities like Sydney, New York, Tokyo and London remain in the black. 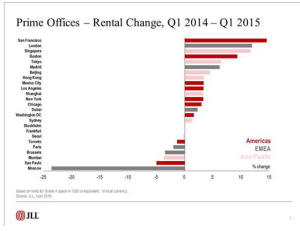 Long-term trends differ from short-term trends; the latter being mere influences. The fall in Mumbai CBD’s rentals could be due to a short-term influence. The contrast in Mumbai’s office market is that the city has 17 per cent vacancy, which is not healthy, but at the same time, there is gentle appreciation seen in rentals owing to demand revival. That said, there is a shortage in availability of the right product offering (superior quality supply) at the right location.

One of the major reasons behind the fall in rentals is the shift in demand from Mumbai’s CBD to the secondary business districts (SBDs) in its suburbs. The city’s CBD is losing its sheen over the past five to six years and rentals here fell by 3.4 per cent in the last one year.

As demand for residential properties moves towards suburbs farther away from the city centre, so does the demand for office spaces. As part of that trend, Bandra Kurla Complex (BKC) is now the de-facto CBD of Mumbai.

Some other reasons for the shift include:

· Sufficient and quality supply in the SBDs: With contemporary office spaces available in the SBDs like BKC, SBD (north) and SBD (central), occupiers have been moving away from the CBD, which had a limited supply of quality office spaces. Most multinationals have moved to SBDs already.

· Competitive rates in SBDs: There are many options to bargain for lower rentals among the SBDs thanks to the supply pipeline. Although BKC may be the new CBD, it has only a 10-11 per cent share of the overall supply whereas rentals are lower in SBDs (central and north) and supply is high.

There are always certain trophy projects in the business districts that beat the trend and continue to show positive growth in rentals. Three such marquee projects in the BKC market are:

PM launches Amrut, smart cities and ‘Housing for All’ schemes