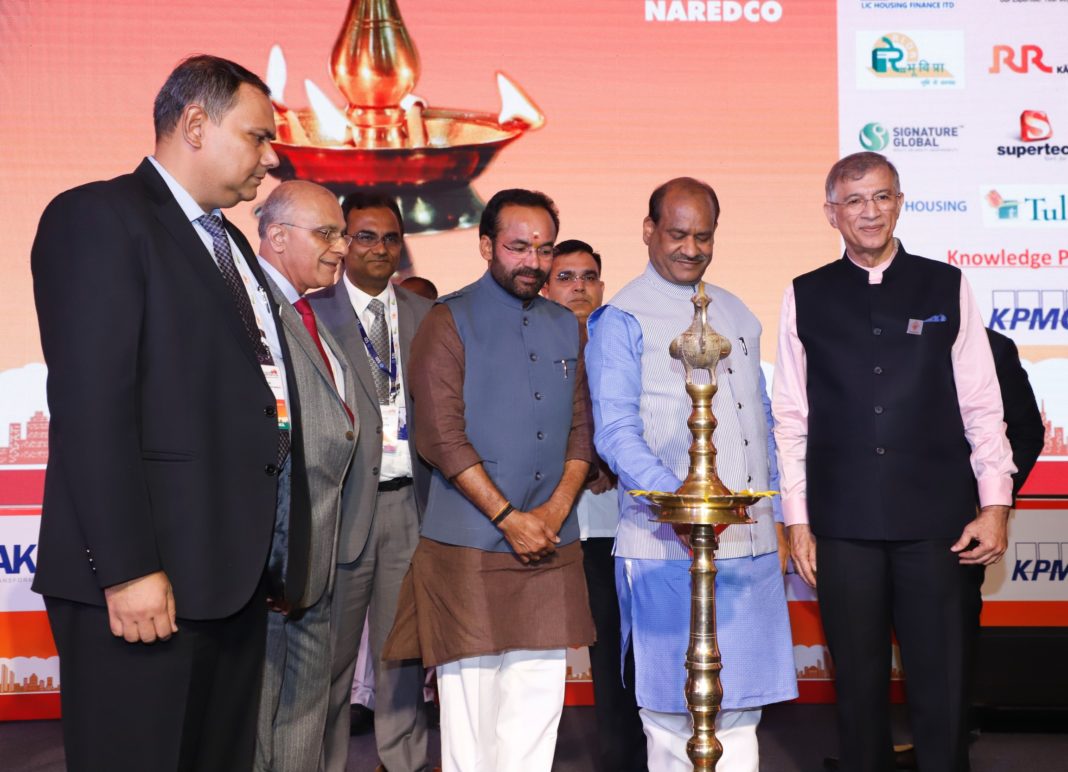 New Delhi, August 19.08.2019. “Providing a house with basic amenities is the topmost priority of the government led by Prime Minister Shri Narendra Modi for which all stakeholders of the real estate sector need to make their contribution. In this context, I compliment NAREDCO for taking up a very pertinent agenda for its deliberations during its national convention,” said G Kishan Reddy, Union Minister of State for Home Affairs, speaking at the 15th National Convention of NAREDCO organised on the theme Housing For All 2022: Real Estate Inflection Point: Readying for the Future. He said that to meet this challenge, infrastructure needs to be built on a war footing in both cities and villages. As the pace of urbanisation is rising in the country that boasts the second largest urban population in the world, efforts need to be made in terms of ensuring land availability, up-gradation of urban infrastructure, sustainable development and planning of cities, check of slums growth, access to basic facilities of drinking water, sewage and sanitation to the rising urban population which may soar from 340 million in 2008 to 590 million in 2030. He hoped that NAREDCO’s two-day convention from 19th August to 20th August at Hotel Taj Palace will go a long way in initiating brainstorming discussions on the challenges as confronted by the government goes about meeting its Housing For All mammoth mission.

Concurring with the views of MoS, Home Affairs, Shri Om Birla, Speaker Lok Sabha said that it is heartening that NAREDCO has lent its full weight behind Prime Minister Narendra Modi’s pledge to ensure the right to housing to more than 130 crore Indians. He acknowledged the crucial role of the real estate sector in contributing to the economic development of the nation and ensuring employment to the teeming millions. He especially underlined the need to remove misconception regarding the developer’s community that has come in for criticism because of few of its members defaulting on project completions and failing to meet homebuyers’ expectations. He exhorted that more and more developers should embrace the low-cost housing model. He assured me that he will pitch in for the implementation of all relevant suggestions made during the discussions at the NAREDCO’s Convention.   He expressed optimism that he will be able to evolve political consensus for a target as noble as providing a roof over the head of the last man on the economic ladder.

Earlier, NAREDCO’s 15th National Convention 2019 took off on a very resolute note with Rajeev Talwar, Chairman, NAREDCO affirming firm commitment on the part of the premier real estate representative body to make untiring, sustained efforts to fulfill Prime Minister Narendra Modi’s mission of providing Housing For All by the year 2022. In his welcome address, Talwar first congratulated the Prime Minister on taking some path-breaking steps in national interest such as abrogation of triple talaq, Article 370 and 35A which speak of the refreshing progression and boldness ushered in government policies. As an acknowledgment of the Modi government’s positive initiatives, he pledged NAREDCO’s full support to make the dream of a roof over every household in the country a reality, and even make endeavors to realise this formidable goal by the year 2021.

Endorsing Talwar’s unflinching commitment, Niranjan Hiranandani, President NAREDCO reiterated the organisation’s enthusiasm to respond to PM Modi’s clarion call for providing a house for every Indian. Deeply appreciating some of the policy reforms such as demonetisation, regulatory mechanisms, and GST, he exuded confidence that the real estate sector will contribute towards accelerating GDP growth by taking it even beyond 10 percent to help India become a developed nation. He added that the next five years are very crucial for India’s growth and NAREDCO will rise to the occasion to keep pace with the dynamism and energy exhibited by the government in taking India to the next level of growth.

The inaugural session also witnessed the launch of a joint knowledge Report by NAREDCO and KPMG focusing on the theme of ‘Disruptions in Real Estate Sector in India’.