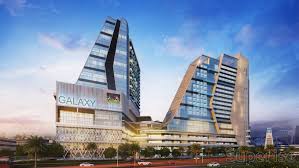 GBS, a 2 million sq. ft. of mixed development by Galaxy & Sawasdee Group of Companies, is an elite project influenced by contemporary architecture, stunning interiors, and a mesmerising glass façade, said a press release.

The retail shops in Galaxy Blue Sapphire Plaza are situated up to six floors, while the seventh to 22nd floors display luxury commercial office spaces. The fourth and fifth floors have food courts, restaurants, multiplex and the sixth floor includes a state-of-art gym and a large entertainment area.