Mumbai, commercial capital of the world’s fastest-growing major economy, is one of the top-10 improvers in JLL’s latest ‘Global300’ survey. Top-10 improvers are cities whose scores in the index of ‘commercial attraction’ have improved the most over the past year. The index of commercial attraction is JLL’s primary benchmark of the size and strength of a city’s economy and real estate market.

With growth exceeding 7 per cent in the city over each of the last three years, it is no wonder that Mumbai made a strong presence in the top list (see below). Reforms being undertaken by the national government are boosting confidence in the national and metro area economy. Construction levels are high, with Mumbai increasing its Grade-A stock by 26 per cent over the past three years, and are expected to add an additional 22 per cent over the next three years.

Moreover, Mumbai is enhancing its position as a hub for global corporations, with firms among the world’s 2,000 largest companies headquartered in the city rising by 50 per cent over the last 10 years. The other cities figuring in the list are Milan (Italy), Istanbul (Turkey), Tehran (Iran), Madrid (Spain), Cairo (Egypt), Riyadh (Saudi Arabia), Lagos (Nigeria), Jakarta (Indonesia) and Jeddah (Saudi Arabia).

Mumbai and Delhi also figured among the global top-30 cities in the survey (see below). JLL top-30 global cities account for 64 per cent of the total cross-border investment into the ‘Global300’.

JLL’s ‘Global300’ is also based on the index of commercial attraction, which measures a city’s economic and real estate power and status. Underpinned by a proprietary database of key performance indicators covering 660 cities worldwide, the index is unique in that it includes key real estate measures (namely investment volumes and commercial real estate stock), as well as socio-economic and business indicators such as economic output, population, air connectivity and corporate presence. 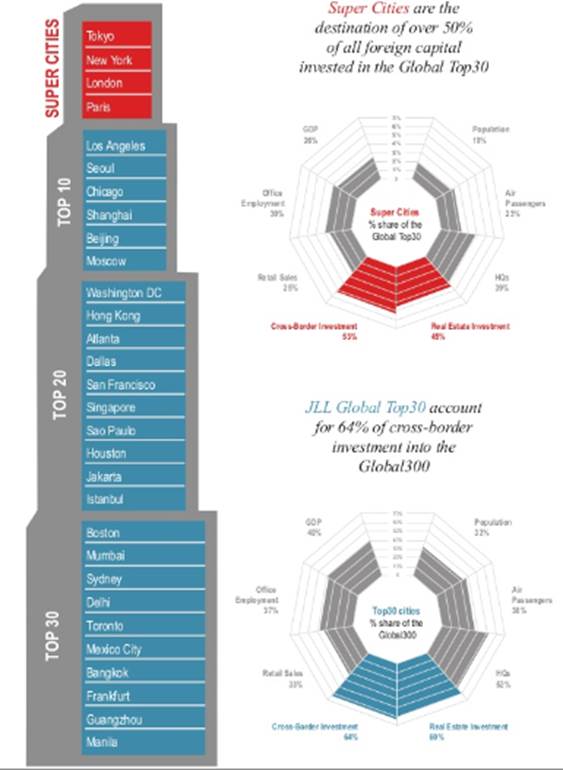 A novel food experience at One Horizon Centre on X’Mas