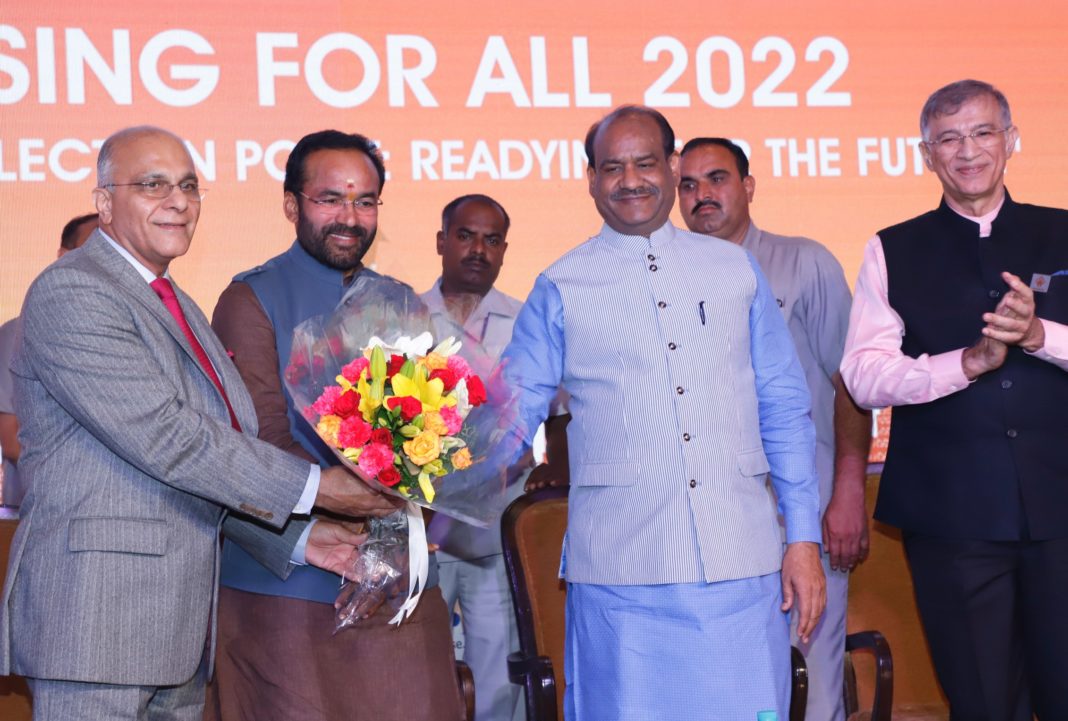 National Real Estate Development Council (NAREDCO) an apex real estate body which works under Ministry of Housing & Urban Affairs has organized its 15th National Convention on 19th & 20th August 2019 at Hotel Taj Palace New Delhi. The underlining theme of the event this year was ‘Housing For All 2022- Real Estate Inflection Point: Readying For The Future’.

Key topics selected for discussion were:

Ø  Housing for all 2022: next steps for enabling affordable housing

At the inaugural of NAREDCO 15th National Convention, Shri Om Birla, Speaker Lok Sabha said “It is heartening that NAREDCO has lent its full weight behind Prime Minister Narendra Modi’s pledge to ensure the right to housing to more than 130 crore Indians. He acknowledged the crucial role of real estate sector in contributing to the economic development of the nation and ensuring employment to the teeming millions. He especially underlined the need to remove misconception regarding the developers community that has come in for criticism because of few of its members defaulting on project completions and failing to meet homebuyers’ expectations”.

Talking about the mega mission of the Modi government to provide a roof over the head of each Indian household by 2022 that is highly ambitious agenda and faces formidable challenges but Minister of State (I/C) for Housing and Urban Affairs Hardeep Singh Puri set the temperatures soaring further high when he announced at the National Real Estate Development Council’s (NAREDCO) 15th National Convention that his ministry is all charged up to meet this target two years in advance, that is, by 2020. Puri also made a significant point that while in  the Congress-rule (Year 2004-2014), urban rejuvenation programmes received a sanction of Rs 150000 crore, in the present dispensation’s rule this figure has gone up by six times. Soon out of 100 Smart Cities announced, the government will be able to roll out 50 smart cities by December 2019, he revealed.

“The 2022 target of a pucca home with basic facilities in the name of the lady of every household in the country will be achieved two years in advance. To achieve this target, we need deep involvement of all stakeholders and I compliment NAREDCO for lending their support to the government to make this dream project a reality in the times to come”. Puri stated.

“Providing a house with basic amenities is the topmost priority of the government led by Prime Minister Shri Narendra Modi for which all stakeholders of the real estate sector need to make their contribution. In this context, I compliment NAREDCO for taking up a very pertinent agenda for its deliberations during its national convention,” said G Kishan Reddy, Union Minister of State for Home Affairs

Many new insights emerged on the Real Estate Regulation Act at the 15th National Convention of NAREDCO. Speaking at the convention, Durga Shankar Mishra, Secretary, Ministry of Housing and Urban Affair revealed that the government is working towards amending several provisions of RERA which will benefit all stakeholders, be it developers or homebuyers.  The MoHUA had organized several regional workshops of RERA which were attended by him as well as Minister, MoHUA. “We had received very valuable inputs at these workshops. Based on these inputs, we have felt that there is a need to bring about many changes in RERA Act. We will soon make relevant amendments in the law.  We will initiate discussions again and make changes in the law wherever required to make it more effective,” Mishra elaborated.

Earlier, NAREDCO’s 15th National Convention 2019 took off on a very resolute note with Rajeev Talwar, Chairman, NAREDCO affirming firm commitment on the part of the premier real estate representative body to make untiring, sustained efforts to fulfil Prime Minister Narendra Modi’s mission of providing Housing For All by the year 2022. In his welcome address, Talwar first congratulated the Prime Minister on taking some path breaking steps in national interest such as abrogation of triple talaq, Article 370 and 35A which speak of the refreshing progression and boldness ushered in government policies. As an acknowledgment of the Modi government’s positive initiatives, he pledged NAREDCO’s full support to make the dream of a roof over every household in the country a reality, and even make endeavours to realise this formidable goal by the year 2021.

Endorsing Talwar’s unflinching commitment, Niranjan Hiranandani, President NAREDCO reiterated the organisation’s enthusiasm to respond to PM Modi’s clarion call for providing a house for every Indian. Deeply appreciating some of the policy reforms such as demonetisation, regulatory mechanisms, and GST, he exuded confidence that the real estate sector will contribute towards accelerating GDP growth by taking it even beyond 10 per cent to help India become a developed nation.

Mr. Parveen Jain, Vice Chairman NAREDCO said that the next five years are very crucial for India’s growth and NAREDCO will rise to the occasion to keep pace with the dynamism and energy exhibited by the government in taking India to the next level of growth.

The inaugural session also witnessed the launch of joint knowledge Report by NAREDCO and KPMG focusing on the theme of ‘Disruptions in Real Estate Sector in India’.