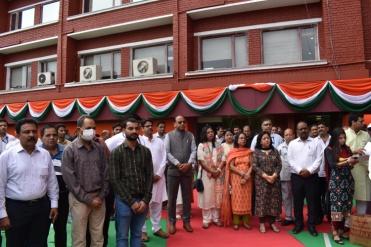 New Delhi, August 15, 2022: NBCC celebrated the 76th Independence Day at its headquarters in New Delhi. The celebration of freedom commenced with the unfurling of the National Tricolour by CMD, PK Gupta followed by the National Anthem. To commemorate the 75 years of Independence various interactive programs and contests were held under the aegis of Azadi ka Amrit Mahotsav (AKAM) and Har Ghar Tiranga campaign. The winners of quiz, essay writing, rangoli making, painting, debate competitions were felicitated by CMD.

All the Senior Officials joined the celebration and were addressed by the CMD. He further congratulated everyone for portraying excellence both nationally and internationally and talked about the achievements of the Har Ghar Tiranga campaign.