JLL Research’s latest report ‘Is Indian Real Estate Heading Towards A Tectonic Shift?’ examines the transitions that India’s real estate has undergone over the past decade. One among the major trends written about in the report is the gradual transition seen in the share of office space occupied. Greater occupier diversity is being seen after more than a decade of IT/ITES dominance.

Absorption of office space broadly mirrored the economic fortunes of the occupier industries through the business cycles over the last decade. The global financial crisis (GFC) in 2008 saw a significant contraction in the share of IT/ITES companies in total office space absorption in the country as these firms reeled under the effects of widespread cuts in IT spends worldwide.

After a brief period of recovery during 2009-10, the share of IT/ITES sector has continued to decline as the Indian technology sector itself is transitioning from its traditional labour arbitrage model towards newer technology platforms such as cloud computing and automation – a trend that cuts down on the requirement for human resources and, consequently, office space. The share of IT/ITES sector in leasing volumes has declined from 48 pc in 2005 to 32 pc at the end of 2Q 2015.

The lower absorption of office space by the IT/ITES sector would be compensated to a large extent by new-age sectors such as eCommerce. The blistering pace of growth of the eCommerce sector in the country has resulted in massive office space absorption – a trend we expect to continue over the next decade as broadband connectivity further penetrates to rural households. 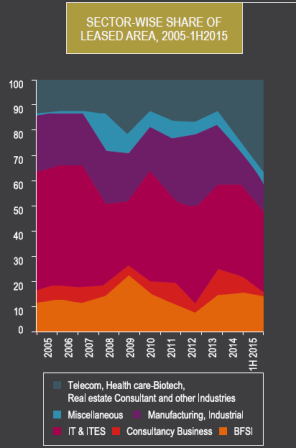 Another sector that has undergone substantial erosion in space absorption is the manufacturing sector, whose share in leasing volumes has declined from 22.5 pc in 2005 to 10.8 pc in 2015. Domestic manufacturing continues to be highly uncompetitive, saddled by difficulties in land acquisition, environmental clearances and archaic labour laws.

The Modi government’s renewed thrust on manufacturing through its flagship scheme ‘Make in India’, has received a positive response from many MNCs. The government has put in place a defined agenda for implementing structural reforms in labour laws and land acquisition act, which are precursors to successful implementation of ‘Make in India’. The renewed focus on the manufacturing sector would result in associated addition of manpower and space that would result in a sustained, multi-year increase in office absorption.

The traditionally defensive sectors such as telecom, healthcare and bio-tech behaved resiliently in the aftermath of the GFC with little impact on their hiring and office space absorption. Within this space, the export-driven sectors of healthcare and bio-tech experienced record sales and profit growth during 2012-13, a period which was otherwise slow for the domestic economy. This led to strong hiring and consequently, rise in share of leasing volumes by this occupier type from 14% in 2005 to 37 pc in 2015. The share of these occupiers can be expected to rise over the next decade as healthcare sectors are increasingly expected to take the inorganic route to future growth.

The savings accruing from lower petroleum and other commodity prices (of which India is a large net importer) would enable the government to better fund big-ticket infra projects like Delhi-Mumbai industrial corridor (DMIC), the smart cities mission and construction of national highways, thereby boosting the construction and infrastructure sectors and their share in office space absorption.

The share of the BFSI sector in leasing volumes has been relatively stable through the last decade. After reaching a low-point of about 8 pc in 2012, the share of BFSI reverted to its long term average of around 13 pc by 2015.