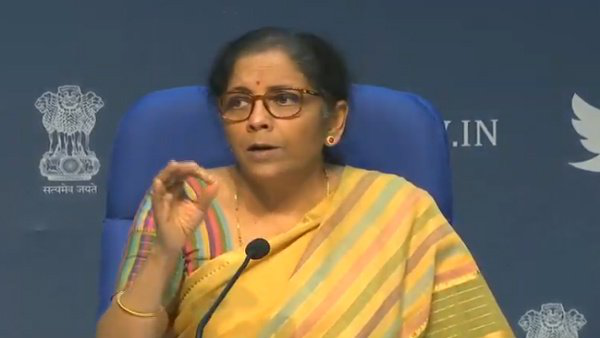 New Delhi, May 17, 2020: In order to give relief to companies defaulting on loans due to the COVID-19 stress, Finance Minister Nirmala Sitharaman on Sunday said that no fresh insolvency will be initiated for one year under the IBC (Insolvency and Bankruptcy Code). Coronavirus-related debt will also be excluded from definition of default, informed Sitharaman. She further added that the minimum threshold to initiate insolvency proceedings raised to Rs 1 crore from the earlier Rs 1 lakh, which largely insulates MSMEs.

The Finance Minister also announced decriminalisation of the Companies Act in violations involving minor technical and procedural defaults including shortcoming in CSR reporting, inadequacies in board report, filing defaults and delay in holding AGM.

The Finance Minister further informed that seven compoundable offences under the Companies Act altogether dropped and five to be dealt with under alternative framework. The Government also allowed companies to directly list securities in permissible foreign jurisdictions. Private companies, which list non-convertible debentures on stock exchanges, would not to be regarded as listed companies.

The 5th and last tranche of the INR 20 lakh crore economic package announced today can help smaller local developers to tide through the unprecedented coronavirus crisis to some extent, and give them some time to get their business on track. In this last tranche, the FM focussed on measures pertaining to MNREGA, businesses, and steps to improve the ease of doing business, among others. In a big relief for struggling SMEs and MSMEs from going under insolvency in the present uncertain times, the FM announced that any debt incurred during Covid-19 for a company will be excluded from the default category under IBC. Additionally, she announced that no fresh insolvency will be initiated for one year so impacted businesses can focus on survival and recovery for this period. This measure, along with previously announced sops such as extension of loan moratoriums and extension of RERA deadlines can come to the rescue of smaller local developers who are particularly impacted by the funding crunch and low sales.

The expected lockdown extension has been announced, India welcomes the life-saving aspect, and looks forward to ‘relaxations and openings’ which will help sustain livelihood too. The ‘zoning’ will be decided by the State Governments/ Union Territories, and I see this shifting of decision-making as empowering the states, which is a good step. The economic reforms which have been announced along with the stimulus package point to a calibrated reopening of economic activity, and in Lockdown 4.0, the ‘ease of opening up’, with due precautions, comes as a ray of hope – we should see it enabling India to move into the ‘new normal’, of life along with buffer and containment zones.

String of economic reforms announced in the fifth and last tranche of Rs 20 lakh crore support package announced by Hon’ble Finance Minister will  accelerate private sector investments in the country and lead to a self-reliant India.

The decision to allocate an additional Rs 40,000 crore under MGNREGS will help in generating employment opportunities and boost rural economy through higher production.

The focus of the Government in increasing public expenditure on health and investment in grass root health institutions will ramp up health infrastructure in rural and urban areas.

Announcement on IBC reforms including raising minimum threshold to initiate insolvency proceeding to Rs 1 crore from Rs 1 lakh, suspension of fresh initiation of insolvency proceedings upto to one year and excluding COVID-19 related debt from the definition of default will lead to enhancement of ease of doing business in the coming times.

Reform of decriminalisation of Companies Act violation including technical and procedural defaults will de-clog the criminal courts and NCLT and provide much needed relief to the industry stakeholders.

Announcement for corporates including direct listing of security.ies by Indian public companies in permissible foreign jurisdictions, lower penalties for all defaults of small companies, one person companies, producer companies and start-ups, among others will significantly improve our ease of doing business rankings.

The significant reform of introducing new Public Sector Enterprise Policy will provide an excellent platform for private sector to leverage the opportunities in all sectors of economy including strategic sectors too.

Launching of PM eVIDYA programme for multi-mode access to digital/online education will contribute significantly to technology driven education system in the coming times.

Reforms announced for supporting State Governments including borrowing limits of States being raised from 3% to 5% for 2020-21 only and to promote state level reforms part of the borrowing will be linked to specific reforms like increasing job creation through investment and promoting urban development, health and sanitation will go a long way in percolating the benefits at grass roots level.