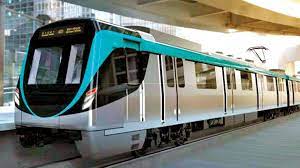 The upcoming Noida-Greater Noida Metro link is witnessing the fastest-ever pace of construction in India, published in a media report. In a record time of six months from the date of award of the contract, the first U-girder for the corridor was put in place across two piers at Greater Noida’s Delta station on Friday.

Delhi Metro Rail Corporation (DMRC) officials said this is the fastest ever girder launched from the date of award of the civil contract – June 2015 – in the country.

Touted to be ready for trial runs by December 2017 and commercial operations by March 2018, DMRC officials now hope they will be able to roll out the Metro service before the scheduled timeline.

“We are confident that in view of the fast pace of construction of this line, it should be possible to open this section for the public a few months before the schedule”, said Mangu Singh, MD of DMRC.

The report said the first girder for the Noida-Greater Noida Metro track took less than half an hour to lift into place by two hydraulic cranes. About 30 engineers and supervisors carried out a smooth operation. DMRC plans to put into place another two U-girders in place this month. They will be located at sectors 148 and 71.