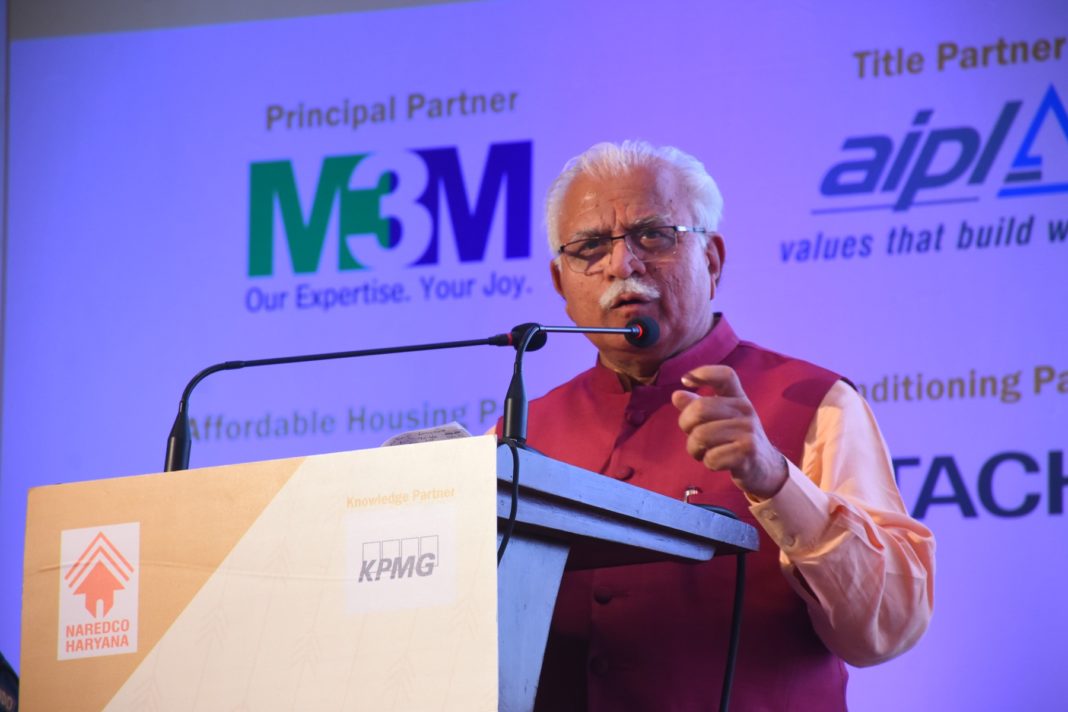 Bringing cheer to the realty estate sector, Shri Manohar Lal Khattar has announced the opening of the window for the Group Housing in Gurugram. The window will open for 60 days. Making a slew of announcements at the one-day summit of NAREDCO on Friday, Mr Khattar said the Transit-Oriented Development (TOD) policy has also been extended further for 90 days.

Chief Minister Haryana Shri Manohar Lal Khattar was speaking about the changes in the real estate sector in India at NAREDCO Rising Haryana: Affordable Housing & HARERA Summit., “We have resolved issues between developers and consumers. Haryana is the only state that has two RERA authorities, out of which one is exclusively for Gurugram. We have regularized 628 big and small colonies. This has been done at nominal rates by levying a charge of only 5% of the collector rate.” He added.

“Despite the Deen Dayal Jan Awas Yojana being in place, we were not able to give facilities to unauthorized colonies. So we decided to come up with minimum EDC charges to encourage builders. As many as 2,50,000-275000 families do not have houses in Haryana, so we decided to help them through the scheme.”

Any policy that is coming in the way of development should be changed but should not burden the exchequer at the same time. We were facing problems in EDC and made necessary changes. Real estate stakeholders are of different kinds. But for those working the affordable housing sector need more support.

Apart from touching upon these policy changes, the Haryana Chief Minister also announced the coming up of five new big cities near the KMP Expressway. “Each city will be planned in a minimum area of 5,000 hectare and will be connected to all expressways. This way, an area of 25,000 hectare is slated to be developed as an economic in the near future,” he said.

He also made another announcement to provide a fleet of 50 add 50 new cars to Gurugram police in the coming few days.

Also speaking on the occasion were cabinet minister Shri Rao Narbir Singh, and MLA Umesh Aggarwal. “Despite the slowdown, Gurugram suffered the least due to good policies of the Haryana government. The last government only gave licenses. They minted money in the name of EDC and did not give boost to the infrastrucrure. But the BJP government has invested in infrastructure of Gurugram,” he said.

Also present on the occasion was Anand Mohan Sharan, Principal secretary, Haryana, who said that in the last 4 years, the department of urban local bodies had taken a number of steps. “For example, as much as 2,600 crore has been invested under the AMRIT scheme. Out of this, work for 1,800 crore has already been started. As many as 628 colonies have been regularized and 1,000 crore has been sanctioned in the first phase,” he said.

“GIS mapping of several towns has started. House tax survey in a scientific manner has been started. Every house and every city is given a unique 14-digit no. Each house will have an exculsive number plate with a QR code,” he added.

Giving a presentation on Affordable Housing, Neeraj Bansal, KPMG, Partner and Head, pointed out, “Almost 4% houses sanctioned in India have come from Haryana, attracting large players. Global names such as KKR, Goldman Sachs are investing in Haryana. There is potential and real work happening in Haryana. Stiffer deadlines by the government have helped a lot. Subsidies, tax exemptions have gone a long way.”

Praveen Jain, President, NAREDCO Haryana, thanked the chief minister for taking strong steps to help Haryana grow. Speaking on the occasion, he appreciated the policies of the government for a better future of the state. Also, mentioned that the first time we got policies that were beneficial to buyers as well as builders. Till now, housing was the prerogative of rich people. The pace of infrastructure in the last 5 years in Gurugram have been exceptional.”