JLL Research’s latest report ‘Is Indian Real Estate Heading Towards A Tectonic Shift?’ examines the transitions that India’s real estate has undergone over the past decade. Among the major trends written about is the trend of companies migrating to offices in the suburbs and peripheral areas of major Indian cities.

Driven by a combination of cheaper rents and lesser commute times for workforce, the migration has risen sharply over the last decade. IT/ITES companies, which were largely location-independent due to their offshore-onsite business model, are the trend-setters in this respect. Other sectors have increasingly taken the cue in setting-up large office spaces in secondary business districts (SBDs) and peripheral business districts (PBDs).

Developers have responded to occupier demand by executing large IT parks and office projects in SBD and PBD precincts. PBD has seen the biggest jump in the share of office stock, rising from 28 per cent in 2004 to 47 per cent in 1H2015. The share of SBDs in office stock has remained stable over the last several years at around 43 per cent of the total office stock.

CBD, on the other hand, has witnessed a severe attrition of occupiers and a decline in fresh supply of office space that’s led to a significant drop in its share of office stock from about 33 per cent in 2004 to 10 per cent in 1H2015. 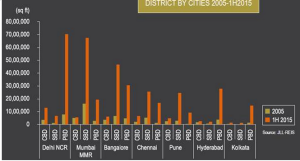 Reasons behind the transition

The preference for SBDs and PBDs has been largely dependent on the development of mass transit systems and social infrastructure in these locations. The availability of large contiguous land parcels and a high quality supply of buildings have been the other major factors that shaped this trend.

Rental difference – the principal factor driving the rush towards extended suburbs – has been significant. As of 1H2015, average rental values at PBD locations in the country were about 45-60 per cheaper than CBD rentals. 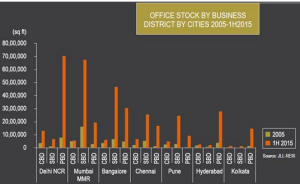 A closer look at different cities

Delhi-NCR has witnessed the most spectacular emergence of alternate business districts in Gurgaon and Noida, which draw workforce not only from within local municipal limits but also from Delhi and other areas of NCR.

The trend has been especially pronounced in case of Gurgaon, which has seen a meteoric rise in almost all demographic and economic indicators. Gurgaon has witnessed an unprecedented urban transformation with its urban population having clocked the fastest growth in the country over the last decade – 17 per cent compound annual growth rate (CAGR) from 2001 to 2011.

Gurgaon and Noida comprised over 80 per cent of the lease volumes in 2015 – amongst the highest proportion of lease volumes registered by peripheral destinations in any city.

Mumbai has been an exception to the trend of office migration to PBD due to lack of supporting infrastructure and connectivity. However, the city witnessed a steady shift in office stock from prime CBD areas like Nariman Point to SBD precincts such as Lower Parel and Andheri- Kurla road. An exodus of offices out of CBD was sparked by lack of quality office stock and the complicated ownership structure.

The opening of Bandra-Worli Sea Link in 2009 enhanced connectivity from the island city to the suburbs while the Santacruz-Chembur Link Road (SCLR) and Mumbai metro projects improved east-west connectivity. The lack of any significant mass-transit projects along the crucial North-South corridor and to Navi Mumbai over the last decade has restricted the development of office districts in PBD precincts. This is evidenced by the modest increase in office stock in PBD as compared to SBD.

Bangalore and Hyderabad have witnessed a significant shift in office stock to PBD mainly due to dominance of IT/ITES sectors, which have traditionally established large campuses at low-cost PBD precincts. Significant progress on ring road projects linking the city peripheries has improved connectivity in these cities.

Pune and Chennai have witnessed greater interest in the SBD locations, which provide affordable alternatives for large occupiers looking for Grade-A properties. SBD Old Mahabalipuram Road (OMR) in Chennai and Hinjewadi in Pune emerged as front-running destinations in the respective cities due to an abundance of large Grade-A properties.

Kolkata has seen a rising interest in PBD precincts such as Rajarhat, which has witnessed a significant rise in office stock, driven primarily by the IT/ITES sector.

Prateek Group comes up with a bouquet of offers