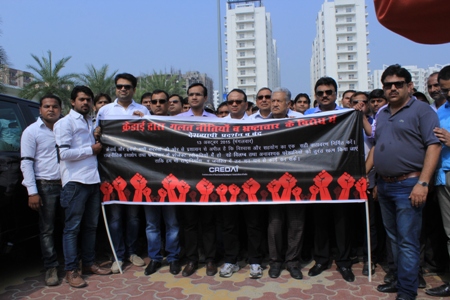 Credai Raj Nagar Extension organised a peace marchon Tuesday as part of Credai’s nationwide protest over the death of Suraj Parmar, President of Thane chapter of Maharashtra Chamber of Housing Industry. The march commenced at 9:30 a.m. from VVIP’s Project and ended at KDP Gol Chakkar in Raj Nagar Extension.

Manu Garg, President, Credai Raj Nagar Extension, said, “The demise of Mr. Parmar has left the entire real estate sector in a shock. The extent of harassment and distress could be imagined with the harsh step he took to end his life.” Gaurav Gupta, General Secretary, said, “It is very saddening to know that a renowned and reverent name in realty sector lost his life due to a negligent and an incompetent system.”

Team Gaursons holds protest at its office in Indirapuram

Another feat by Everest