Prateek Group on Wednesday announced the launch of its upcoming project –Prateek Grand City at Siddharth Vihar, next to Indirapuram. 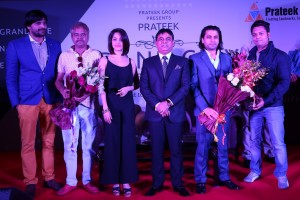 Spread over 40 acres of prime land at NH-24, the Prateek Grand City makes “luxury affordable” by offering an integrated township of 2, 3 and 4 BHK homes with luxurious amenities. The Group is offering homes at the project starting from Rs. 28 lakh up to Rs. 63 lakh.

At a press interaction in New Delhi, Prashant Tiwari, Chairman along with Prateek Tiwari, Managing Director, Prateek Group, launched the project that is “aimed to elevate the living standards of the common citizens.”

According to Prashant Tiwari, “Prateek Grand City is an effort to provide top class quality of living to the common man, who aspires for a prime address but has to compromise on quality due to high costs of luxurious real estate.” Prateek Tiwari said, “With the Prateek Grand City we aim to bring luxury to the common man thus creating an altogether different niche. The new Government’s policies have paved the way for creating affordable housing for the masses and thus this project of ours is aimed at bringing cutting-edge housing solutions to them.”

According to après release, the Prateek Grand City takes forward the company’s vision of creating affordable housing where the intent is to offer luxurious amenities within affordable budget. The township is designed by internationally renowned architect Hafeez Contractor and is based on a thematic blend of classical and contemporary architecture.

The architecture of the township features avant-garde techniques including double height entrance lobby, welcome lounge in each tower, classical theme landscaped garden and water bodies, featured grand entrance gates and a stilt floor height of 8 meter for landscaping and for clear view of the whole township.

The township, to be developed on a land allotted by UP Awas Vikas Parishad is located along side the proposed 14 Lane NH 24 Expressway and is a 12-minute drive from Pragati Maidan, New Delhi.

According to the company, Prateek Grand City features all modern amenities brought together to simplify daily life. Within the township, the Group offers a high-end international school, a hospital, a dedicated police station all-covered car parking, banks, ATMs, amphitheatre and ultra-modern clubs for recreational needs.