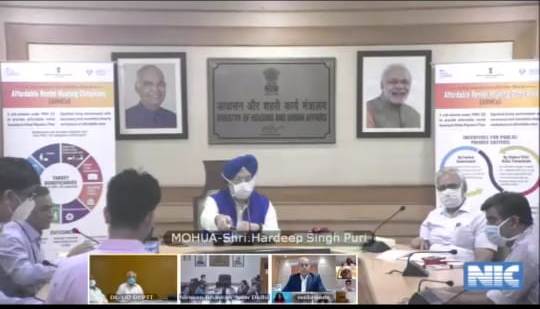 Durga Shanker Mishra, Secretary, MoHUA, presided over the function which was attended by senior officers of state governments/UTs and representatives of Naredco, Credai, Ficci, CII and Assocham connected through webinar.

COVID-19 pandemic has resulted in massive reverse migration of workers/urban poor in the country. In line with the Prime Minister’s call for ‘Atmanirbhar Bharat’, the Union Cabinet on July 8, approved Affordable Rental Housing Complexes (ARHCs) as a sub-scheme under the Pradhan Mantri Awas Yojana (Urban) to provide ease of living to urban migrants/poor.

The ARHCs will be implemented through two models. The first model entails utilising existing Government-funded vacant houses to convert into ARHCs through Public Private Partnership or by public agencies for a period of 25 years. According to the second model, construction, operation and maintenance of ARHCs will be done by public/private entities on their own available vacant land for a period of 25 years.

The ARHCs Knowledge Pack released by the minster includes Memorandum of Agreement to be signed with States/UTs, Operational Guidelines of ARHCs, Model Request for Proposal (RFP) for selection of Concessionaire by States/UTs/ULBs under Model-1, Expression of Interest (EOI) for shortlisting of entities under Model-2 and Frequently Asked Questions (FAQ).