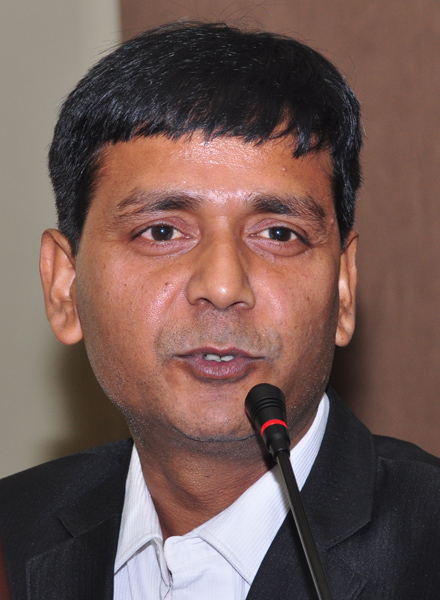 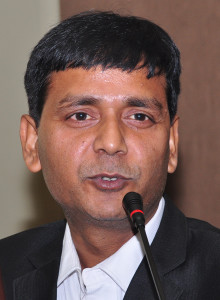 While real estate companies did not exactly set the stock markets afire in 2013, this year may not be too different. Buyers may return to the market if realty companies are willing to get back to the basics

It has been a year of harsh reality for realty companies. It has been a difficult market to sell their dream homes. With the liquidity squeeze limiting their expansion and hit their sales, the verdict from the stock markets had been clear – thumbs down for most of the companies.

ON SHAKY GROUND?
With a combination of factors working against the real estate industry, little wonder 2013 had been a slow year  for the companies too. Galloping inflation, which forced the Reserve Bank of India to keep interest rates on a tight leash, did not help either.

The best example of what had been happening with the  sector is shown in the charts of Godrej Properties. The stock lost nearly 70 per cent in 2013 despite being a financially strong group with a good track record with its business spread across in at least 10 cities in the country.

Now Godrej Properties is hoping that it will be able to emerge as a national player.

Unitech, the second largest realtor in the country, fared little better. While its stock had little to be written about ever since the 2008  inancial meltdown, 2013 saw the stock plummet nearly half the value. Several of its projects are delayed even as it has been selling land and liquidating its non-core businesses. 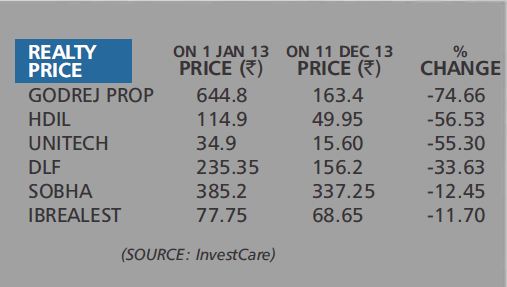 The markets have shown their thumbs down sign to DLF, India’s largest realtor, which is resorting to selling non-core assets. That means it will complete another year when the IPO price of `525 has been elusive for its loyal investors. HDIL, which championed the cause of redevelopment of slum areas in Mumbai, has predictably not done well either.

A report by Price water house Coopers found that India  slipped in the rankings of top investment destinations across Asia-Pacific. Only Bengaluru figures in the top 20 destinations for investments across the continent. Mumbai  and Delhi were among the top five  destinations in 2011.

With inflation continuing to remain doggedly high, it might well continue to be a difficult time for realty stocks  during 2014. The most critical factor is whether the interest rates continue to be at elevated levels. With the economy slowing down and new jobs not being created in large numbers, these two biggest factors could mean another slow year for real estate stocks.

CEMENT: MUTED YEAR
For cement companies, it has not been as bad a year as realty stocks. Over the last few years, consumption by realty companies has driven demand for cement companies. The price of cement, driven by strong demand from the real estate sector in western India, has been closely watched across the country. Companies which have managed to raise prices in the western region have been able to perform better, which has shown in the stocks. Rising fuel prices has not helped in the difficult times for cement companies. With transportation expenses among the highest input costs for running the business, it is eating into the margins in these difficult times.

The eastern part of the country is showing the weakest demand for cement. Traders say that prices have been slipping and they do not expect a revival in prices in the next few weeks.

The situation is not different in west India, which led the growth in cement volumes. Traders have brought about a modest increase in prices, which they expect, can be absorbed by the market.

In north India, demand is muted like in the other parts of the country. Rajasthan has withdrawn ban on sand mining and now that the new government is in place, sand mining may commence with full intensity, pushing up prices marginally.

During 2014, cement companies are not expected to turnaround soon because demand from the economy continues to be slow. Prices are expected to soften in the near-term before any turnaround can be expected. If the new government takes some hard steps to drive
growth, cement off-take could see a rebound, which may drive stocks. 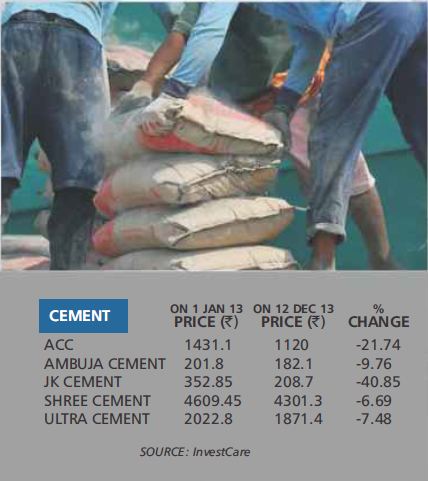 There may be a near record number of houses that may have been unsold across the country. Not the best opportunity to paint the town red for companies in the business. Leading up to Diwali, the demand did see a spike. Little wonder then that paint companies
continue to do better than realty stocks.

Part of the reason is also because leaders like Asian Paints have managed to expand their services, offering customised painting solutions for end consumers. These services, driven by exclusive outlets, have added a  new stream of revenues for the leader in the segment.

But the stock that has stood out for the year has been Berger Paints, driven largely by demand from homes in the decorative segment. The company gets 80 per cent of its revenues from the decorative segment and demand continues to be robust. It is the small towns
that are driving demand for paints while large cities seem to have seen a modest slowdown. The biggest period for paint companies is the two months before Diwali. Market watchers are keeping a close watch on whether industrial demand can be revived for paint
stocks to do better. Demand for the decorative segment may not be sustainable if it continues to be driven by the smaller towns. Big cities consume products that are high margin for businesses and the paint industry is not expecting things to be rosy any time soon.

TILES: AIMING HIGH
The success of the tiles industry is inextricably linked to the real estate industry – commercial or residential. With fancier offices and malls driving commercial real estate and premium apartments being a higher margin business,  Kajaria Ceramics and Cera Sanitaryware seem to have sensed that business opportunity. They are now focusing on high-end products, where margins are  healthier and which are less impacted by the slowdown.

Kajaria Ceramics is also in the process of raising capital and  reducing its holding marginally below the 50 per cent mark. It plans to add a new line of products in the sanitaryware business to drive its top-line during 2014, when the slowdown for the realty sector is expected to bite even more.

Stocks Outlook 2014
• Only Bengaluru figures in the top 20 destinations for investments across the continent. Mumbai and Delhi
were among the top five destinations in 2011.
• Getting back to basics “transparency, honest pricing and modest pricing” may just help turn the tide.
• The most critical factor is whether the interest rates will continue to be at elevated levels.
• During 2014, cement companies are not expected to turnaround soon because demand from the economy continues to be slow. Prices are expected to soften in the near-term before any turnaround can be expected.
• There may be a near record number of houses that may have been unsold across the country. Not the best opportunity to paint the town red for companies in the business.

During 2014, it might be difficult for these companies to replicate the performance over the past 12 months unless there is a  turnaround in the economy. If the real estate sector and its allied sectors are to do any better in 2014, liquidity to the sector has to pick up and the economy must create more jobs. But in the absence of benign interest rates it will be difficult that the first two possibilities become a reality. 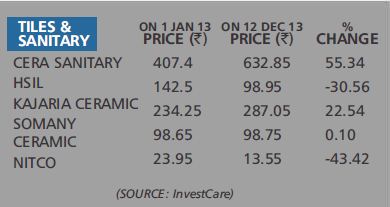 The biggest question for next year will be – what can make the buyer return to the market so that the huge pile up of the unsold industry can also be liquidated. Getting back to basics

The Road Ahead for Indian Realty

The Company has reported 20% YoY growth in sales volumes at 0.66 million, supported by strong sustenance sales across projects...