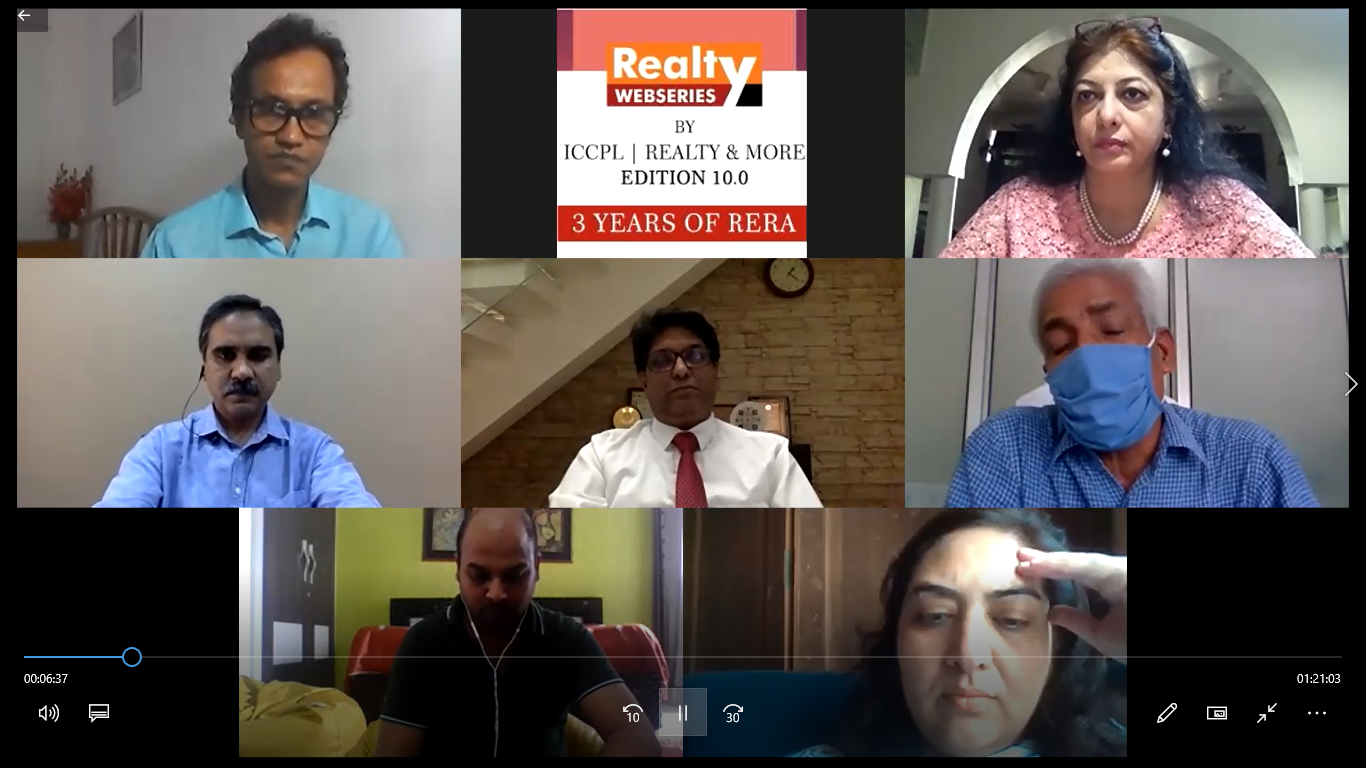 The 10th edition of Realty Webseries, hosted by ICCPL and Realty & More on July 18, continued with the theme ‘Three Years of RERA’ and the star speaker on the subject was Dilbag Singh Sihag, Member, HRERA Panchkula Bench.

Explaining the background, Singh said prior to the advent of RERA, builder-buyer agreements used to be one-sided in majority of cases. “Ninety-five per cent of the agreements were absolutely unequal, unbalanced and unreasonable”, he said. Allottees and promoters were standing on very unequal pedestrians, he stressed.

The HRERA Member also added, “Not even a single case we experienced where the rate of interest was less than 18 to 24 per cent and in case of delay, the promoter was giving a very meagre compensation; that is Rs 2 to Rs 5 per square feet. That is almost less than 2 per cent interest.”

To this Raghuvanshi replied that in the absence of RERA, builders had introduced this for themselves. “Whether it was Rs 2, 5 10 or 15, the builder had imposed this to discipline himself in the absence of a regulator”, she said.

Alok Singh interjected at this stage to say, “Earlier everyone was working arbitrarily. It was the case of might is right.” Raghuvanshi responded emphatically: “The point I’m trying to make is that even before RERA, there were some who were responsible and some who were not.”

Giving her viewpoint, WTC ED Shah said with RERA coming in, definitely there’s a lot of transparency and it has brought in a lot of investors’ confidence. “I would agree with what Ananta just said that the rules keep on changing and there’s a lot of work at the background but, yes, RERA has brought in a positive change”, she said. RERA, she opined “is a work in progress and I would still say that it’s not as complete as international investors would like to see.”

Moderator Roy brought in another aspect at this point by asking, “Is RERA somewhat toothless? Would you like to see more teeth to the regulator, he asked.

RERA expert Venket Rao replied to this by saying, “As far as the aspect of teeth or more teeth to RERA, I would say that it actually stems from the fact that we are talking about a dynamic document as Ananta was mentioning here. Now this is, unfortunately, from the past three years we have not seen the same kind of dynamism that has been in respect of other Acts from Parliament in respect of this Act. We are seeing changes coming through in IBC. On very drop of a hat you see some changes coming through.”

Agreeing with him, Alok Singh said, “Even we had thought that now orders would come within three months as opposed to up to five years being taken by consumer courts sometimes.” He then suggested that a pan-India data should be prepared as to how many cases have been disposed of by RERA, how many orders implemented and how many people have got their money or flat. Such data, he said, would go a long way in bringing in transparency and developing the faith of people in RERA.