Across Mumbai, Thane and Navi Mumbai, proportion of completed-yet-unsold inventory is only 3.35 per cent of the total number of units available for sale

Findings from the joint research by JLL India and MCHI Credai

Developers have been left wondering why end-users are not buying into their projects even after offering numerous discounts and schemes. The latter, on the other hand, are playing the wait-and-watch game, expecting prices to go down given the continued slump in sales.

To clear the air, JLL India along with the Maharashtra Chamber of Housing Industry (MCHI-Credai) decided to find out what the numbers portray. Only 2,600 (or 3.35per cent) of the total unsold inventory of 77,460 residential units have been completed in Mumbai, as well as Thane and Navi Mumbai, according to latest figures.

In Mumbai (MCGM limits) and Thane (TMC limits), only 1.10 per cent and 1.33 per cent of the total unsold units are ready for possession, respectively. Only in Navi Mumbai (NMMC limits), this proportion is higher at 8.13 per cent. The inventory overhang in Mumbai (including Thane and Navi Mumbai) is more than 30 months, according to latest figures.

Adding here, Dharmesh Jain, President, MCHI – Credai says, “If we take an industry average, 30-storeys is the average height of a building and on an average it takes 4 – 4.5 years to complete the project, hence at 30 months inventory, the stock would be sold well before the completion of the project which is a very healthy scenario for the industry. Moreover, Mumbai and MMR can look forward to a stable period ahead, as the statistics seem to suggest.”

He added, “As we note that 18 per cent of the absorption happens at the launch, 27 per cent happens at the completion of the project, whereas remaining 55 per cent happens during the project construction period, and this is where the customers’ buying confidence dips. This is where we need to walk an extra mile to bring back the customers’ confidence. Intermittent policy changes only delay the projects as a developer is required to seek fresh approvals. Now these are delays over which developers have no control on. However, with the current Government’s intent of easing the way of doing business and with a new DP / DCR in the offing, we are sure that things can only brighten up from here. We have already noticed that in the last two quarters, business & buying sentiment has shown traction which reflects positively on both the supply and absorption rate in Mumbai & MMR.”

Comparing the current inventory of completed-yet-unsold units to the corresponding inventory of 3,094 units around the same time last year shows how inventory has, in fact, decreased. However, there is slow absorption due to buyers holding on to their purchase decisions – expecting a price correction in this weak market. It also goes on to show how buyers prefer to buy into completed projects. Also, the market has become largely end-user-driven and investors no longer park funds in residential real estate as the high returns that it was once known for, have considerably diminished.

The sluggish sales could also be due to most of these 2,600 units being priced above Rs 1 crore, which is an unaffordable range for many end-users. While developers may think ticket sizes offered by them are justified, the market seems to think otherwise. While suburbs from Vile Parle to Goregaon have 205 completed-yet-unsold units in the range of Rs 2 crore and above, a major chunk of the unsold units are concentrated in Navi Mumbai. Moreover, units priced below Rs 65 lakhs are situated in emerging areas of Navi Mumbai like Ulwe, Karanjade, Dronagiri, etc., or on the far-away stretches off Ghodbunder Road in Thane.

This indicates a clear mismatch in demand and supply of product offerings. Even though end-users would like to buy in these upcoming areas, they do not. The reason being a lack of social and physical infrastructure – highly needed to attract end-users – in these locations. In such a scenario, developers need to gauge the market sentiment and reduce ticket sizes to align with more realistic prices. They need to redesign the larger flats into smaller unit sizes, wherever possible. Sales will improve if this happens.

Some developers are already adapting to the changing consumer demand. Buyers are put off by poor track record of a developer. Builders also need to realise that buyers will buy into their completed projects and thus, should stick to their construction deadlines and manage their cash flow during the construction phase properly. Data shows that while 18 per cent buyers bought houses in the launch phase, 27 per cent bought houses nearing completion. Even after completion, it takes developers at least two quarters to sell out the entire remaining inventory. 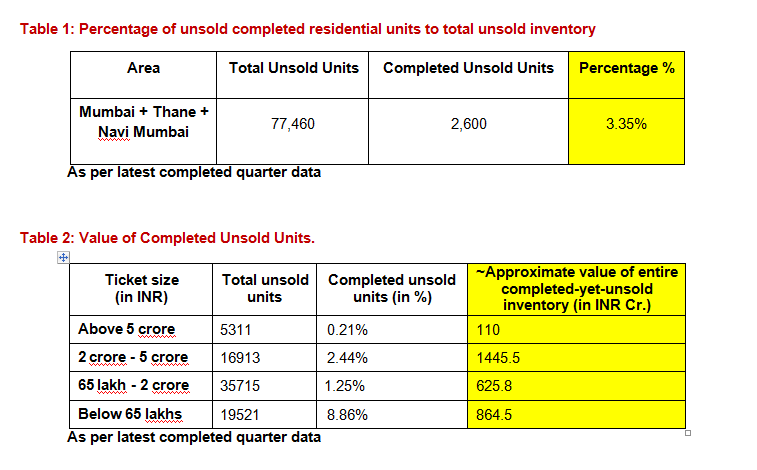