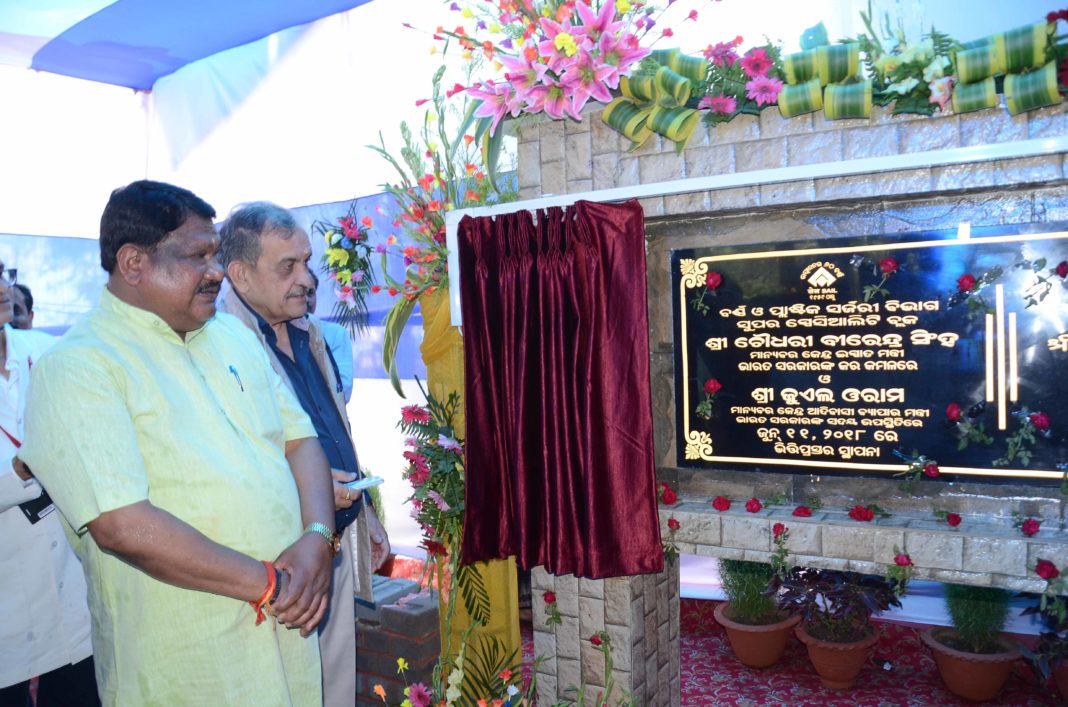 New Delhi/ Rourkela, June 12, 2018 “SAIL contributes a major chunk of the steel production in this country. It is today the foremost in terms of production technology and is at par with any other international steel company,” said Hon’ble Union Minister of Steel, Shri Chaudhary Birender Singh while addressing a press conference during his visit to SAIL’s Rourkela Steel Plant. Shri Singh dedicated the rebuilt Blast Furnace-1 ‘Parvati’ of RSP to the Nation on 11th June 2018 in the presence of Shri Jual Oram, Hon’ble Union Minister of Tribal Affairs.

Earlier, the Hon’ble Minister also laid the foundation stone of the Burns and Plastic Surgery Department of Super Specialty block at Ispat General Hospital. This unit will be unique in the region and will fulfill the requirements of not only the people of Rourkela but also of the neighboring districts and states.

In the press conference Shri Singh said, “Steel production in the country has reached three digit number for the first time in history, notching up 102 million tones in 2017-18. This has been one of the major achievements in the last four years. India has surpassed Japan to become the second largest steel producer in the world and has also become a net exporter of steel in the last two years. The rated steel production capacity has increased by 32% in the last four years to reach a level of 134 million tonnes,” he added. Shri Chaudhary also mentioned that at present the steel industry contributes 2% to the GDP of the country.

Elaborating about the National Steel Policy (NSP) he said, “As per the policy, we plan to install 300 million tonnes of steel capacity by 2030. The capacity addition at SAIL’s Rourkela Steel Plant will contribute to this vision of the government. We plan to double RSP’s capacity to 8.2 million tonnes, which is our next target for the plant.”

It is worth mentioning here that Blast Furnace-1 ‘Parvati’ is the first Blast Furnace of SAIL that was dedicated to the nation on 3rd February 1959 by the then President of India, Dr. Rajendra Prasad. The rebuilt furnace laced with superior technology has a higher production capacity. With the rebuilding the annual production capacity of the furnace has increased from 0.438 Million tonnes (MT) to 1.015 MT.

He further added, “The Hon’ble Prime Minister of India, Shri Narendra Modi had promised to set up a super speciality hospital at Rourkela, and a beginning has been made in this direction with the laying of the foundation stone this morning. These facilities will be further augmented in the days to come.”

The Hon’ble Minister also elaborated on government policies like Domestically Manufactured Iron and Steel Products (DMISP), introduction of BIS standards, introduction of the concept of life cycle cost in government projects and production of high end steel from scrap. He deliberated upon the steps being taken to increase consumption of steel in the country to meet the target of 160 kg per capita steel consumption by 2030. He said that the consumption has already increased from a level of 48 million tonnes to 68 million tonnes in the last four years.

Earlier, the Hon’ble Minister interacted with the members of the various trade unions and lavour organisations. He also reviewed the performance of the plant in an interaction with officials of the steel plant where he advised them to further improve the product profile.

In the evening Shri Chaudhary also felicitated 18 hockey cadets and two coaches of SAIL Hockey Academy for winning a number of accolades in various national level tournaments. He announced Rs. 50,000 cash award for each of the cadets and coaches. He emphasized on providing state of the art facilities for hockey players in the SAIL academy and inclusion of girl cadets in the academy.