New Delhi, August 6, 2018:  CBRE South Asia Pvt. Ltd, India’s leading real estate consulting firm, today announced the findings of its latest report ‘SEZs IN THE SUNSET ERA: TO GO OR NOT TO GO?’. As per the report, SEZ space currently accounts for about 22% of the total office stock in India across seven leading cities with Bangalore, Chennai, Delhi-NCR and Hyderabad housing almost 77% of this SEZ stock Overall, the technology sector dominated SEZ space take-up with over 60% space absorption in the past three years. 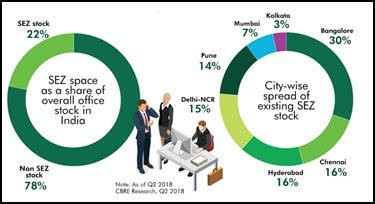 Commenting on the findings of the report, Anshuman Magazine, Chairman, India and South East Asia, CBRE, said: “We feel that the space take-up in SEZs should remain strong till the end of 2019. We also expect that at least till the end of 2019, there will be a continuity in several trends in the SEZ segment of the commercial real estate market with growing preference for SEZ spaces by corporates, particularly those belonging to sectors such as technology, research and consulting, engineering and manufacturing, banking and financial services.”

The government in 2015 laid a roadmap to successfully reduce corporate tax from 30% to 25% by 2019. In this light, it was announced to simplify the tax structure, profit/investment – linked incentives and area-based deductions would be phased out. This also included announcing a sunset date on tax exemptions granted to SEZ developers and unit holders. CBRE’s assessment indicated that corporates have continued to view SEZs favorably, not only due to their direct and possibly indirect tax benefits, but also due to the availability of high-quality, large-sized floor plates that are ideal for their consolidation/expansion needs.

Commenting on the findings of the report, Abhinav Joshi, Head of Research, CBRE India, said: Despite the sunset clause, corporates have been leasing space in prominent SEZs across leading cities. Firms belonging to the technology sector have had a share of almost 60% in the overall leasing in SEZ space from 2015 – H1 2018. Firms from other sectors such as banking / financial services, engineering / manufacturing, have been active as well. Large-sized pre-commitments have also been reported in upcoming SEZs. We feel this activity will remain strong at least till the end of 2019, post which there could be a rationalization in demand.”

According to the sector-wise segmentation of SEZ space take up in India between 2015 to 2018, the tech industry led the consumption, followed by banking, e-commerce, pharmaceutical, engineering and manufacturing and research, consulting and analysis. The total percentage of technology space in SEZ meanwhile started to come down since 2015, but since 2017 it picked up again. The percentage of banking industry intake in SEZ too went up since 2015. 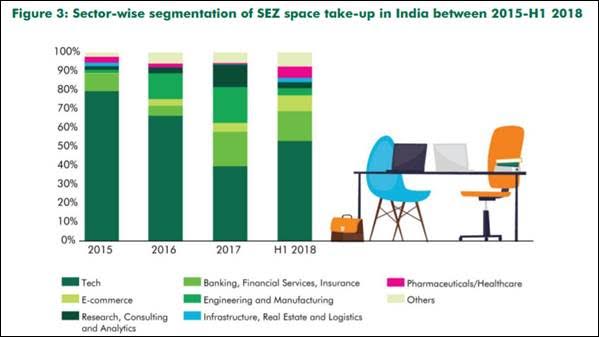 Despite the sunset clause, the availability of quality office spaces offering large floor plates and options for further scalability in SEZ will continue to be an attractive factor for corporates, the report said.

Looking at the response from developers, they are following the occupiers’ strategy of hedging their risks in the long run and are reviewing their plans for the non SEZ segment. In the long run, if the sunset date is not extended, developers might be inclined towards developing tech parks or corporate office spaces, rather than SEZs; subject to land availability, development costs and occupier preferences, the report further stated.

Office leasing sees over 10 pc rise in first half of 2018: CBRE report