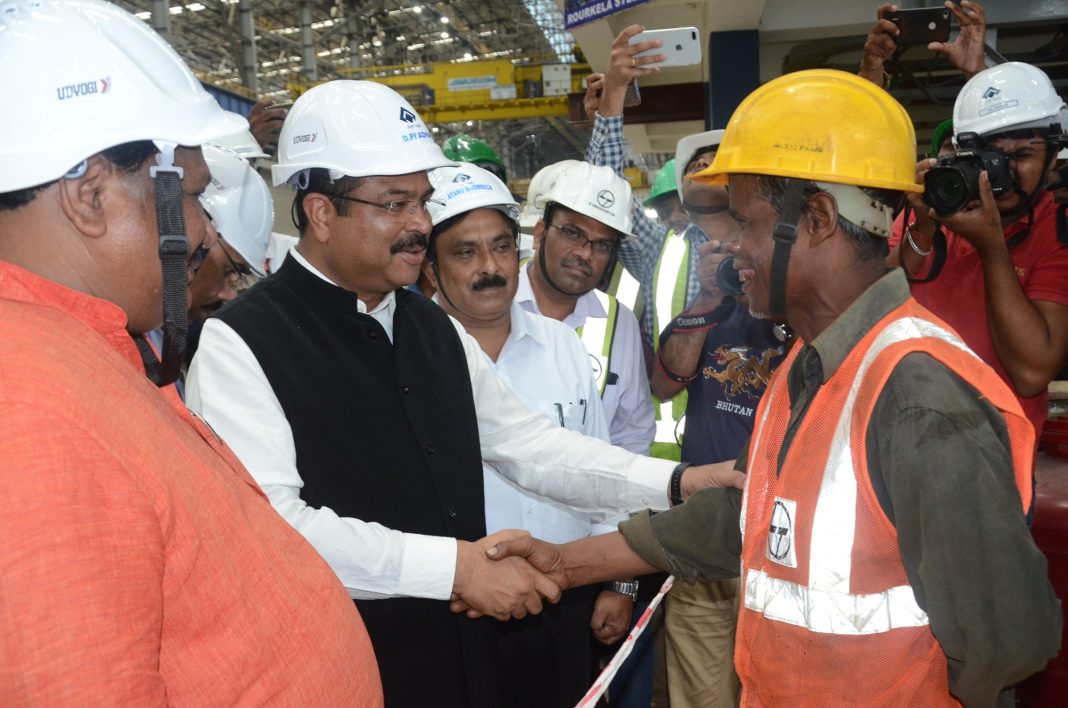 Shri  Dharmendra Pradhan, Hon’ble Minister of Petroleum and Natural Gas and Minister of Steel visited SAIL, Rourkela Steel Plant on 29th September, 2019. In a daylong meeting he took a tour of steel plant, held a review meeting with officials and interacted with the customers.

He called for fast tracking projects and greater contribution towards regional development. The Union Minister first went to the Model Room of HRD Centre. There he was appraised with the functioning of the entire Plant and was shown a safety film. Thereafter the Hon’ble Minister visited the projects site of the Hot Strip Mill-2 and took stock of the progress and future plans. New New Plate Mill was the next destination in his itinerary. He visited the unit, watched the rolling of plates and planted a sapling in the Pragati Udyan in front of the Mill.  He also interacted with the employees on the shop floor.

While chairing a review meeting, the Hon’ble Minister said, “Rourkela is an intellectual hub of Odisha and has contributed in a big way for the development of the state as well as the nation.”  The Hon’ble Minister emphasized upon fast tracking the ongoing projects at the earliest and ramping up the production.He called for greater contribution of Rourkela Steel Plant towards development of the region.  He also stressed on leveraging digitalization in the functioning of the plant. Mr. Gautam Banerjee, ED (Works) made a detailed presentation on the various aspects of functioning of RSP on the occasion.

The Minister also held a meeting with customers. While interacting with the customers, he said, “The steel fraternity has an important role to play in the development and industrialization of the region.” He also emphasized upon creating more consumption centres in and around Rourkela to increase the sales of RSP. Mr. Pradhan also stressed on having regular interaction with the customers to study the changing market demands.