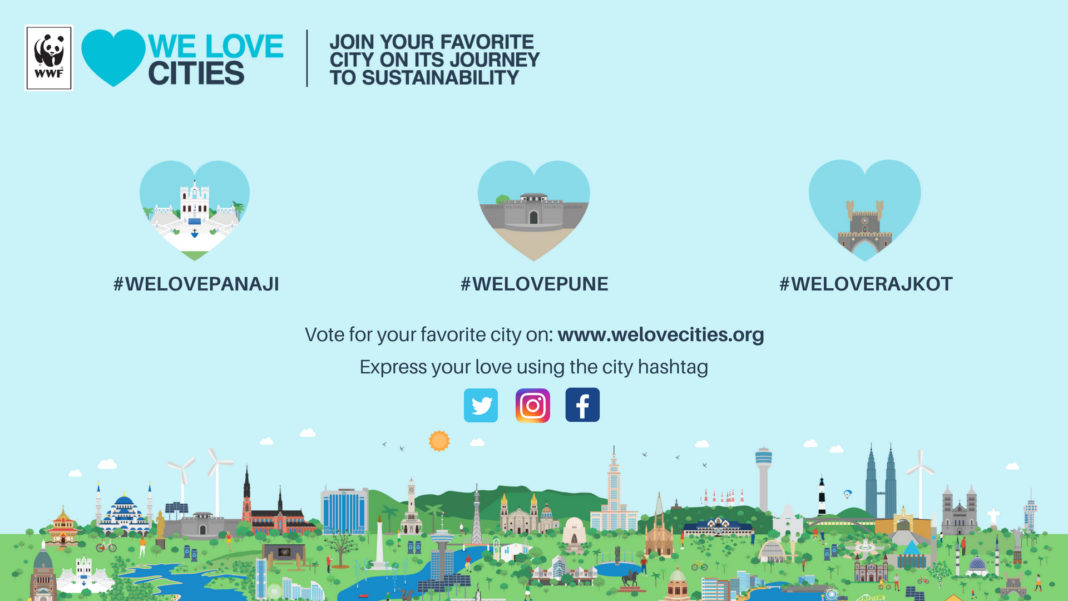 New Delhi, 11 May 2018: Panaji, Pune and Rajkot are the 2018 India entrants to WWF’s global ‘We Love Cities’ campaign, inviting citizens to vote for their ‘most loved city’, selected on the basis of their progressive actions and plans in creating climate – friendly places. These three Indian cities are among 40 cities from 23 countries which made it to the final round of the campaign, aimed to celebrate the most ‘loveable’ sustainable cities. The campaign is WWF’s endeavour to allow citizens to decide their favourite cities and also provide the administration with suggestions on how their cities can adopt environment friendly and sustainable practices for long term benefits.

The We Love Cities campaign is a part of the larger One Planet Cities Programme of WWF. The One Planet Cities Programme aims to reinforce the concept of building sustainable cities through ambitious and inclusive local governments, and engaged and informed citizens, as part of the solution. While the expert jury will be deliberating over the selection of national and global winners for the One Planet City Challenge, the We Love Cities campaign decides winners based on popular votes of citizens. .

Talking about the campaign, Dr. Sejal Worah, Programme Director at WWF-India said, “Digital campaigns like ‘We Love Cities’ provide an open platform for the citizens to come up with suggestions for transformative change that they envision for their cities. Moreover, such campaigns also serve as a means to generate awareness about environmental and climate change issues and the role that the citizens can play in addressing them.”

The WLC Campaign shall run from 7 May to 30 June 2018, on the We Love Cities campaign page- www.welovecities.org and across social media platforms – Twitter, Instagram and Facebook. Citizens are invited to vote for their favourite cities and share what they love about them through comments, photos and videos with the hashtag #welovecityname. People are also encouraged to submit suggestions as to what actions their cities can take to become even more sustainable, which are counted as votes and shared with the respective cities.

In addition to the suggestions, the votes on the campaign pages as well as, every comment, tweet, re-tweet, photo or video posted on social media using the respective city’s hashtag is counted as a vote. The following hashtags are to be used: #WeLovePanaji, #WeLovePune, and #WeLoveRajkot to vote for the respective cities. The city with the maximum votes will receive the ‘Most Loved City’ Award in September 2018.

Introduce a wooden flair to your homes with EVOK this summer