The informal grouping of I I leading real estate developers to work towards infrastructure development in the southem end of Gurgaon and hardsell it to home-seekers in the National Capital Region is a positive development from all angles. While the region, replete with many advantages, will ascend further on popularity charts and buyers’ options will widen, the involved players can look forward to a fresh revival in the sector. Overall, a win-win proposition during slowdown scenario in the real estate industry!

‘Marketing gimmick’, ‘pressure group’ or ‘smart business strategy’! Call it by whatever name, but there is no denying the fact that the coming together of 11 leading developers of the National Capital Region (NCR) to develop and promote Sohna, the southern end of Gurgaon, as ‘South of Gurgaon’ has suddenly enlivened the dormant realty scenario in the region.

Huge billboards announcing the new realty hotbed have come up all across prominent locations in the national Capital and the neighbouring areas of Noida and Gurgaon and fresh strategies are being devised constantly to ensure that ‘South of Gurgaon’ becomes the first choice of every potential homebuyer in not-too-distant future.

Natural beauty, excellent location, easy affordability and an already-developed basic infrastructure are the key factors which prompted these realty players to join hands under the aegis of the Confederation of Real Estate Developers’ Associations of India (Credai), For a cue, there was the success story of Indirapuram, Crossing Republik, and Raj Nagar Extension, all in Ghaziabad, the other close neighbour of the national Capital. Developers in these localities had lobbied jointly with the local authorities to develop infrastructure and the results of their efforts are there before everyone.

“In lieu of the cost incurred by the developers in constructing the road …the authority would give them additional construction rights.”
ROHIT RAJ MODI, Director, Ashiana

As contrast to this,those behind the new initiative were also aware of the fact that how the delay in the development of infrastructure in areas like Dwarka Expressway and New Gurgaon has affected both buyers and builders alike. On Dwarka Expressway, some projects are complete but possession cannot be given as the basic infrastructure like main road, sector roads, and sewer lines are still not in place. 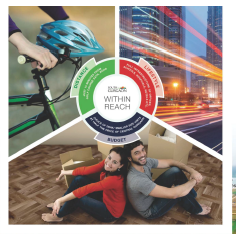 The ‘South of Gurgaon’, which was unveiled at a high-profile event in New Delhi on October 19, is the collective vision of 11 reputed real estate developers of the NCR, namely Supertech Limited, Ashiana Homes, Ashiana Housing, Central Park, Eldeco, ILD, CHD Developers, Silverglades, MKS Ventures, Gold Souk and Nimai Developers. And ever since the launch, each member of this loose-sort-ofconsortium is doing its utmost to ensure that ‘South of Gurgaon’ becomes the next hottest, yet affordable, real estate destination within close proximity of the Millennium City.

These developers will do a joint liaising with the Government and authorities to expedite the process of development of ‘South of Gurgaon’ in terms of infrastructure, connectivity and other necessities like electricity, water, sewage, etc. They also propose to run a CSR campaign for the welfare of the villages around the area.

Developers are also planning to use a new provision that allows builders to buy land for sector roads and build them. Rohit Raj Modi, Director of Ashiana, and a member of the ‘consortium’, said the provision will help them in developing the area. In lieu of the cost incurred by the developers in constructing the road, he said, the authority would give them additional construction rights.

He said the coming together of builders will help in working with the Government and other authorities to develop infrastructure in the region. A total of around 2,000 acres is earmarked for development here.

“One big point of difference is that the planning regulations allow for a higher density that allows us to design for smaller apartments… Secondly, compared to locations on Dwarka-Expressway or New Gurgaon, all the sites here have greater existing connectivity to existing infrastructure.”
SALMAN AKBAR, Director, ILD

While the proposed realty hotspot is away from the hustle and bustle of the main Gurgaon city, it is merely 20minute drive from its main commercial hubs like shopping malls, Cyber City and Golf Course Road. The ‘South of Gurgaon’ is easily accessible from Sohna Road, IGI Airport Golf Course Road, Delhi and other regions. With the introduction of new road planned in the Master Plan from Sector-63A, it can also be approached bypassing Gurgaon completely.

For those looking for affordable housing within the NCR region ‘South of Gurgaon’ makes good economic sense as the property prices here are as low as half of the prevailing prices in the centre of Gurgaon. The developers are selling apartments in the area at a starting price of ~4,500 per sq. ft. as against Rs.6,000-7000 per sqft on Sohna Road, Rs. 8,000-10,000 per sqft on Golf Course Extension Road and Rs. 12,000-24,000 on Golf Course Road.

The number of houses that can be built per acre using the same permitted area is higher in mouth of Gurgaon as against that In Gurgaon. This will enable the developers build smaller hous.es. It will also bring down the price of an apartment to around Rs.50 lakh as against the prevailing minimum of about Rs. 1 crore In Gurgaon.

A spokesperson of the grouping said that “South of Gurgaon is just a few-minute drive from the main Gurgaon city which is highly expensive for the middle class good option for salaried people who wish to stay in or near Gurgaon as the region offers properties in almost half the price compared to Gurgaon. People don’t mind if they have to travel a few minutes more and stay at an affordable place within their price bracket.” Through this association, the developers also intend to educate the homebuyers about the “benefits and affordability of the region”, he added.

The spokesperson further said the future of South of Gurgaon is also bright as it is in close proximity to the upcoming 1,483-km-long Delhi Mumbai Industrial Corridor and Kundli-ManesarPalwal Expressway which will further boost the road connectivity of this region making commutation easier for the inhabitants.

“South of Gurgaon’ is poised to be next well developed self- sustained city as it already has well-planned physical and social infrastructure.”
MOHIT ARORA, Managing Director, Supertech Limited

Realty & More contacted some prominent members of the new-found ‘consortium’ to seek their response to this major development. Apart from being uniform in their excitement over the move, they all had fresh perspectives to share regarding Sohna region, or the newly-christened ‘South of Gurgaon’.

Summarising the campaign, Salman Akbar, Director of realty group ILD, said, “This initiative is being undertaken by 11 Credai members with projects in the Sohna-Master Plan 2031.” The Master Plan, he said, was notified late 2012 and this destination is witnessing most launches now.

“One big point of difference is that the planning regulations allow for a higher density that allows us to design for smaller apartments. Usually, Gurgaon would have 30 per cent- 2 BHK (1300 sqft) and majority of the inventory of 3 BHK (1,800 sqft) and the smaller units had a great demand. The trend here reverses with developers having an option of designing all 2 BHKs,” he said.

Secondly, he said, compared to locations on Dwarka Expressway or New Gurgaon, all the sites here have greater existing connectivity to existing infrastructure such as schools, colleges, offices plus the travel time to essential locations in Gurgaon would always be lower.

Akbar admitted that there are a few infrastructure challenges such as the Badshahpur traffic, However, he said, “Sohna Road had been declared a national highway (NH 248A). NHAI shall be constructing a flyover at Badshahpur town which might take four-five years but would definitely ease the traffic.”

“It will result in a collaborative approach to development, which NCR unfortunately lacks… it shall help streamline the entire development and give necessary boost to infrastructure.”
ANKIT KANSAL, MD and Co-Founder, 360realtors

In his opinion, ‘South of Gurgaon’ is poised to be next well developed self- sustained city as it already has wellplanned physical and social infrastructure. The area, Arora said, “offers a palette of options-1, 2, 3 and 4 BHK apartments, villas, independent floors and so on, in an affordable price range.”

A joint promotion by leading developers in any part of NCR can only mean good news, according to Ankit Kansal, MD and Co-Founder, 360realtors, since “it will result in a collaborative approach to development, which NCR unfortunately lacks.” Kansal said all builders have acquired land and permissions from the Haryana Government and if they come together as a consortium, flit shall help streamline the entire development and give necessary boost to infrastructure.” He said the developers can jointly approach the administrative bodies into delivering promised utilities such as flyovers and transport corridors. “The joint advertising and marketing will only help to gain confidence of a wavering buyer or investor,” he said. 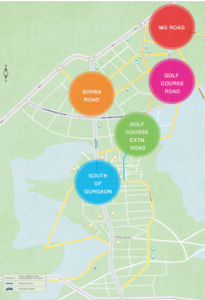 In Kansal’s opinion, Sohna, by virtue of its location, has all elements of being a soughtafter destination. “Firstly, it has green and protected Aravallis and Damdama Lake, which will ensure that natural settings are here to stay. Then the proposal to make a new road link via Sector 63 from Gurgaon to Sohna will reduce the travel from 20 km to 10 km. A flyover over Badshahpur, Metro extension and NH status to the connecting roads will further boost the area”, he elaborated.

Additionally, Kansal said, the policy of TDR (Transferable Development Right) enables small land owners to willingly participate in all stages of the real estate development of which their land can be a parcel and help to make money quickly. “This will push faster infra completion, especially developers can help bridge the gap between the landowners and Government agencies and mediate for smoother cooperation, he added.

Also, he said since the prices of properties in Sohna are much more affordable than the escalated ones in Gurgaon, the boost of infra will help energise the real estate of the area. “This revival may kickstart a correction in other areas of NCR or in any case, may change investor sentiment,” he said. Concluding on an upbeat note, the 360realtors MD said, “The joint approach of top builders will help to create an atmosphere of unified trust amongst the customers which is a positive move.  This is thus a win-win situation, and should lead to increased sales in the region.