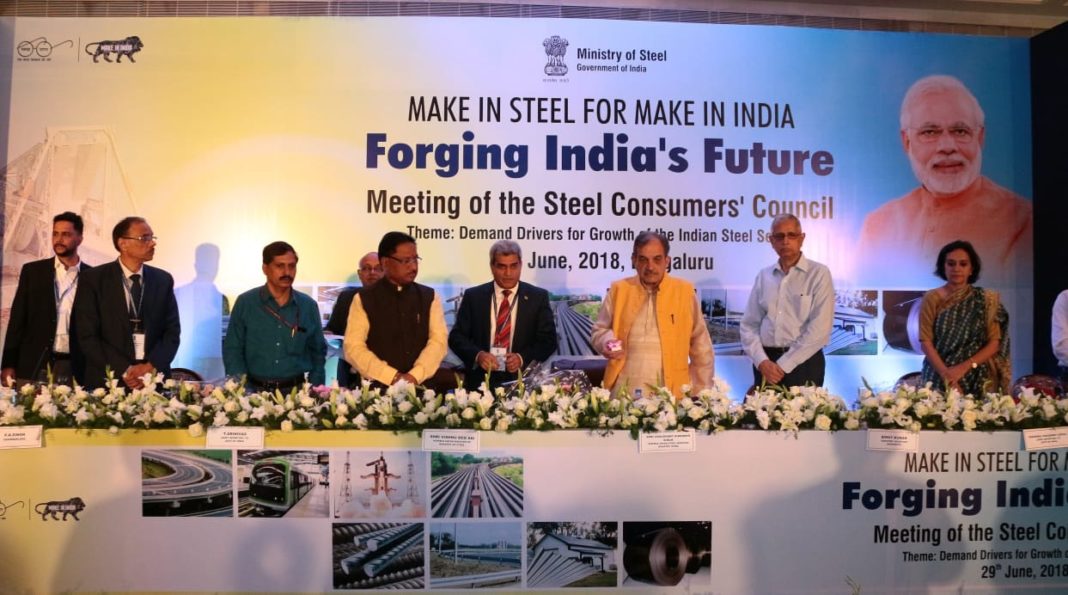 29th June2018
The Union Minister of Steel, Chaudhary Birender Singh chaired the meeting of the recently constituted National Steel Consumers’ Council of Ministry of Steel at Bengaluru today. Bengaluru is strategically significant not only for Karnataka but also for it’s neighboring states in southern region. The meeting was attended by Sri Binoy Kumar, Secretary- Designate, Ministry of Steel, Government of India along with senior officials from the Steel Ministry besides state government officials and captains of the steel industry.

In this gathering, the Mobile App of MSTC, a public sector enterprise under the Ministry of Steel – M3(MSTC Metal Mandi) was launched, which is supposed to bring the buyer closer to the seller, removing the Constraints mainly for small buyers. This is inline with Government of India’s inititatives under Digital India.

Addressing the Council, Shri Singh outlined India’s position in the global steel industry and mentioned that there is a huge potential for growth of steel demand in India. The per capita steel consumption of India at around 68 kg is much less than one third of the world average of around 208kg.

Against this backdrop, forums like Steel Consumer Council have an important role to play, as both producers and users come together to find innovative and out of box ideas to carry forward the industry. The issues of demand, supply, product innovations and logistics will require serious deliberations. Logistics is a critical area and the consumer council has to draw the expected roadmap of logistics for seeking priority attention of policy makers on urgent basis. Country is expected to have growing demand for value added and sophisticated grade of steel for important initiatives like Make in India, Pradhan Mantri Awas Yojna, Pradhan Mantri Gramin Vikas Yojna and Defence needs. To meet the needs of R&D and innovation, Steel Ministry has created Steel Research and Technology Mission of India.

Initiatives such as ‘Make in India ‘and ‘Pradhan Mantri Awas Yojna (Housing for All) by2022’are expected to stimulate steel demand across the country. Policy interventions of the Government like amendment of General Financial Rules to consider life cycle cost of a project in government procurements, notification of National Steel Policy 2017 which envisages a steelmaking capacity of300MT by 2030-31 and implementation of a landmark policy for providing preference to domestically manufactured iron and steel products in government procurement, besides thrust of the government on infrastructure development issue to have a positive impact on the domestic demand of steel.

Steel contributes about 2% to GDP of India. Indian economy is on a growth trajectory. The Government has identified infrastructure as a priority sector, which is bound to bolster the GDP growth rate.

Considering the advantages of steel based structures like lower lifecycle cost, high design flexibility with better aesthetics, steel is a major material component in infrastructure development. All flagship programs like100 Smart Cities Mission, Housing for All, Atal Mission for Rejuvenation and Urban Transformation, Railways Upgradation and modernization of defence sector are expected to use domestic steel.

The Government’s initiatives planned in various key sectors are expected to drive the growth in India’s current GDP, which will ultimately provide additional push required to increase the domestic steel demand in the short to medium term. The Steel Industry and users must work together to promote the usage of steel in areas like crash barriers in hilly areas, railways, development of special grades for energy and medical purposes etc.

Panvel gets the first integrated township in NAINA