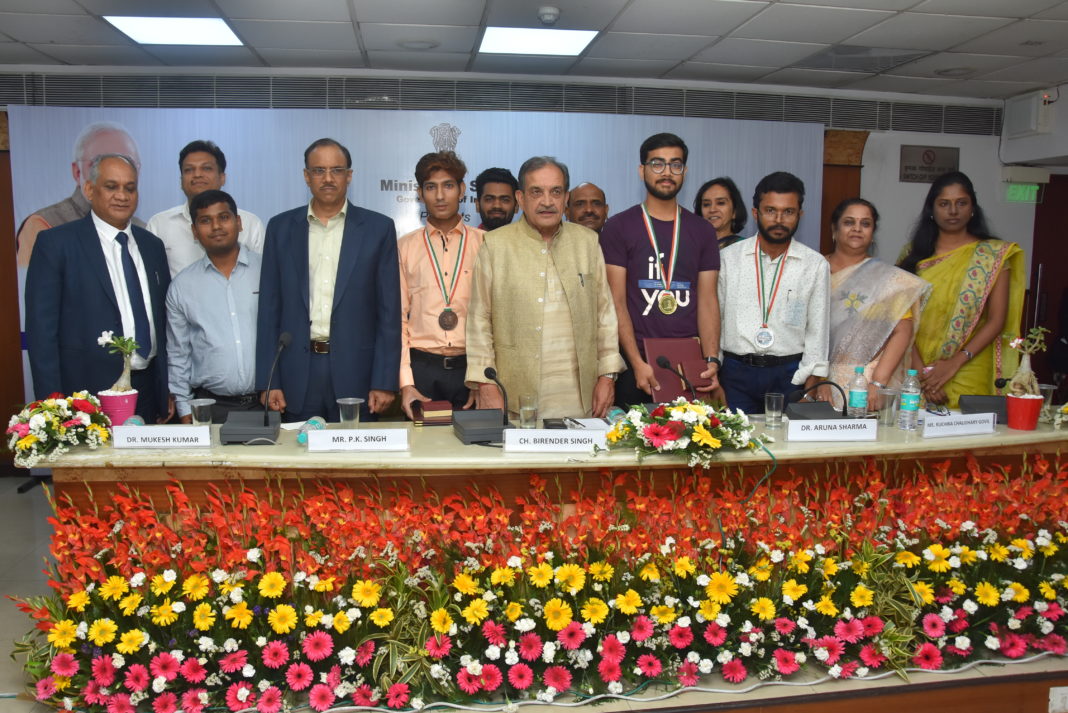 New Delhi, April 17, 2018: Hon’ble Union Minister of Steel, Chaudhary Birender Singh felicitated the winners of contest on Start-up India titled #myLOVESTEELidea at a function organized by Ministry of Steel (MoS) in New Delhi, today. This contest launched during the India International Trade Fair, 2017 by Ministry of Steel aims to encourage fresh business ideas based on steel.

On the occasion, Steel Minister presented the first three winners with cash prizes and certificates and other four participants were given appreciation certificates. Congratulating the winners, minister said, the contest received huge participation and many smart ideas have been received reflecting that steel as a material is gaining popularity and can have several uses. He added that, “Indian steel sector has a lot of growth potential. As the country moves towards 300 MTPA, steel as a material can find various usages in several sectors apart from the conventional sectors. The life cycle cost of steel, its durability, strength, eco friendliness makes it a better choice in construction, infrastructural work etc.”

The first prize was awarded to Mr. Sumit Gupta from Delhi for his idea of Steel based expandable tiny homes for providing low cost basic housing with solar panels and bio toilets. Second Prize was awarded to Mr. Hareesh S. from Thiruvanthapuram for his idea of designs for Stainless steel waste bin, incorporating enclosed segregated storage and with provisions for advertising space. Third prize was awarded to Mr. Vasim Malek from Nadiad City, Gujarat for his idea of laying underground permanent steel utility ducting along roads and in apartments for eliminating disruption of daily life of citizens due to repeated digging up. Apart from these, four appreciation prizes were also awarded to Ms. Revathi Kannan for her idea of on Funtoons stainless steel idli moulds, Mr. Karan Garg from Bathinda for his idea of B2B website for aggregation of raw material purchases by steel SMEs to obtain advantage of bulk pricing and buying, Mr. Usman and Mr. Naseem Khan (jointly) from Himachal Pradesh for development and sales of creative, designer steel items and Mr. Anand Verma from Ghazipur, Uttar Pradesh for his idea on generation of electricity by placing solar panels over highways. The implementation of these ideas has the potential to help increase the steel consumption in the country.

This contest was held in association with MyGov, Government of India. Steel Research and Technology Mission of India(SRTMI), an organization with Ministry of Steel, will provide technical support to the contest winners for taking their projects forward.

Relief under GST will be for future residential projects