Hon’bleSteel Minister while congratulating the entire SAIL Collective highly praised the Company’s contribution towards building ofthe modern India. He said that for the past sixty years,SAIL steel has significantly contributed in the Country’s all key projects including railways, defence, hydro-electric, space programs, infrastructure projects, and has partnered with the Government in its initiatives like ‘Make in India’, ‘Digital India’ and ‘Skill India’ etc.

Also, gracing the occasion were Minister of State for Steel Shri Vishnu DeoSai, Secretary Steel Shri Binoy Kumar, Joint Secretary SteelSmtRuchikaChaudhryGovil in the presence of SAIL Chairman Shri Anil Kumar Chaudhary and Directors of the Company.SAIL’s first Blast Furnace – Parvati was blown in on 3rd February 1959 at Rourkela Steel Plant and the Company will complete the sixtieth year on same day in 2019.

SAIL is celebrating the milestone Diamond Jubilee Year with a number of events planned across all its Plants and Units includingsports events, cultural programs and seminars. Last week the special SAIL Calendar and Notebook for 2019, depicting SAIL’s contribution to various sectors of the economy, were also released by Hon’bleSteel Minister.

Speaking to the media on the occasion, Shri ChaudharyBirender Singh said that these celebrations commemorate the contributions and milestones achieved by the MaharatnaCompany and underscore SAIL’s journey in the last six decades.He said “SAIL has completed its modernization and expansion to reach an installed crude steel capacity of 21.4 million tonnes per year and I wish that the Company soon starts operating at its rated capacity. I am happy that SAIL steel has reached India’s remote corners to build strong infrastructure there.”He also added, “SAIL is increasing its capacity in line with the 300 Million Tonne target envisaged in National Steel Policy 2017.” He mentioned that SAIL has meaningfully been contributing towards developing remote corners of India. The Company has a rich legacy and I am sure it will contribute significantly in future as well.

Speaking on the occasion,Minister of State for Steel Shri Vishnu DeoSaisaid that “In the wake of growing infrastructural activities in the country, the role of SAIL has widened further.”

On this occasion,Secretary Steel Shri BinoyKumar congratulated the SAIL family for their six decade long journey. He said,“Now is the time to understand the changing requirements of domestic as well as the global market and prepare accordingly. I am sure SAIL will fulfil its duties as it has been doing for the last sixty years.” 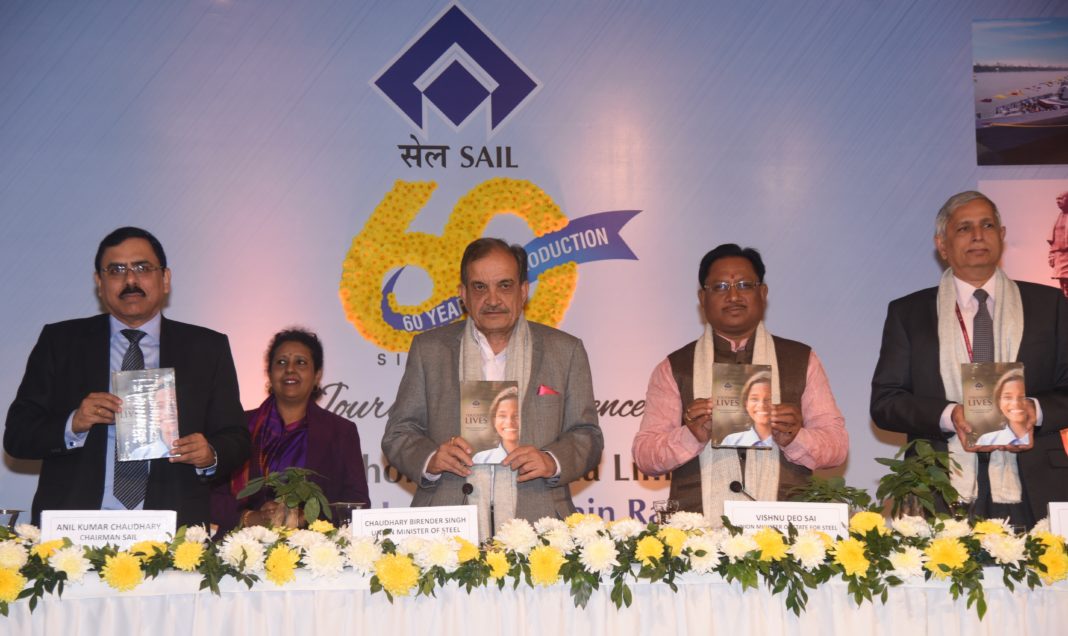 SAIL Chairman Shri Anil Kumar Chaudhary while addressing the august gathering said, “SAIL has always been committed to serve every requirement of the Nation. And this infallible dedication would not be possible without a hardworking and much focussed Team SAIL.” He further added that SAIL steel has been used in every single infrastructure project of National significance in the last sixty years like – Dhola-SadiyaBridge, ChenaniNashri tunnel, SardarSarovardam or the world’s tallest statue – the Statue of Unity.SAIL is supplying steel for Country’s indigenous defence projects and we have supplied steel to India’s space missions too. Praising the quality and variety of steel produced by SAIL, he added that the Company is prioritising to increase its volumes and achieve its rated capacities along with adding value added products to cater to the evolved market requirements. He emphasized that it also the time to renew and refresh our commitment in fulfilling SAIL Vision of becoming a world class organization.

During the function former Secretaries of Ministry of Steel, former SAIL Chairmen and Directors were felicitated. A book on Company’s Corporate Social Responsibility titled Touching Lives- There’s a little bit of SAIL in everybody’s life was also unveiled by the Minister. It is important to mention here that SAIL through its various and wide ranging CSR activities has been touching several lives in and around its steel cities in the areas of health, education, nutrition, sanitation, skill development, sports, arts & culture, environment, etc. SAIL truly believes in the mantra of overall development by touching as many lives as possible.