Until recently, millennial were consistently driving up the demand for studio apartments in the top seven cities – to such an extent that, over the last seven years, developers customarily offered this configuration in their projects. In fact, studio apartments’ share in new launches had been rising y-o-y since 2013. However, the COVID-19 pandemic year of 2020 saw a sudden reversal of this trend.

A studio apartment fundamentally consists of a single large room multitasking as living room and bedroom, with a small kitchenette. Only the bathroom is separated by a wall. Studio apartments have traditionally been favoured by bachelors, students, newly married couples beginning their homeownership journey with a ‘starter’ home, and business travellers who frequently visit a city for work. 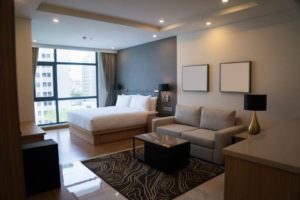 Their small size and no-frills presentation notwithstanding, studio apartments became the favoured option for those with constrained budgets who nevertheless saw wisdom in living close to key employment hubs.

Anuj Puri, Chairman – ANAROCK Property Consultants says, “The studio apartments trend so far can be clearly plotted. Out of the total 2,102 projects launched in 2013 in the top 7 cities, just 75 projects (or 4%) offered studio apartments. The share increased to 5% in 2014, followed by a y-o-y increase in the overall share of projects offering this configuration. This growth trend remained consistent till 2019, when the share was highest at about 19%.”

“In 2020, the COVID-19 pandemic hit, bringing with it the uniquely new WFH and study at home compulsions requiring larger homes,” says Puri. “The bonus also suddenly shifted from expensive central locations to the more cost-effective suburbs and peripheries. In a single year, studio apartments’ new supply share dipped to 15%.”

In contrast, the southern cities of Bengaluru, Chennai and Hyderabad had never caught the studio apartment bug – just 34 projects in these three cities had this compact configuration in the same period.

The top 7 years displayed a clearly-defined growth trend in terms of the number of projects offering studio apartments in the last seven years. Unsurprisingly, MMR has the highest supply share among all top 7 cities in this period. Of 5,442 projects launched in MMR between 2013 and 2020, at least 25% offer the studio apartment option. The numbers are less spectacular in other cities.

Finally in 2020, out of a total of 884 projects launched throughout the year, just 130 projects had studio apartments – a 15% share. 2020 kick-started a trend reversal wherein larger homes – spacious enough to accommodate home offices and online study spaces for children – began to be in higher demand, and developers accordingly amended their new supply configurations.