Delhi NCR has been experiencing phenomenal growth in terms of population. As per Census 2011, the region’s population has shot up by 40 per cent to 21.7 million over the last decade. A report by McKinsey Global Institute highlights that “by 2015, the expected population of the National Capital Region will be 25.9 million.’’

‘Expansion’ is one of the solutions in which the region can accommodate 25.9 million people in the future. No wonder, so many counter magnets have sprouted across the NCR. In fact, recently, three more districts (Jind, Karnal and Muzaffarnagar) were included in the region’s boundary. Now, with this development, NCR’s total area stands at about 51,409 km2, making it 2.28 times bigger than the Washington Metropolitan Area in the US.

‘’Burgeoning population in Delhi-NCR raises a very pertinent question – How are the authorities planning to cater to a huge number in the region which is already underserved in terms of basic infrastructure?’’

Interestingly, while city boundaries are expanding, apartment sizes are seen to be shrinking significantly. Demand for small-sized apartments has gained significant prominence in recent times due to factors such as overall market sentiments, increasing property prices, change in buyer’s’ preference for ‘affordable’ homes, etc. (Commonfloor report title: Reducing Apartment Sizes across Metros: A CommonFloor Report, published in 2014). And while talking about NCR, it is also imperative to keep construction delaysand significant investor participation in mind.

Buoyed by these factors, small definitely seems to be beautiful. Indeed. But how Small? Are there any set standards for size of an apartment? If yes, is it followed by realty players? What is the minimum habitable area? In this article, CommonFloor tries to answer these questions using its proprietary data models.

The questions raised are difficult to answer, but for simplicity, let us consider the general building norms set by the Ministry of Housing and Urban Poverty Alleviation. For Economically Weaker Section, the minimum habitable area is 215 sq. ft., while for Low Income Group, the minimum area is less than 516 sq. ft.

In the backdrop of these numbers, let’s analyse CommonFloor data.

The detailed calculations coupled with our research shows that today several developers have either crossed or are on the verge of crossing the minimum size set by the government.
Now, this is something to think as most of the project sizes publically available are inclusive of loading percentage. As per the market sources, the loading percentage in NCR ranges anywhere between 40-65 per cent, which is quite high. Since, one actually doesn’t get what they pay for, one has to be really cautious about the sizes that are promised by the builders. This issue is something which hopefully will find place in the Real Estate Bill that is expected sometime in this year. As per the proposed bill, sale of property on the basis of super area will be better-controlled. Thus, developers will have to advertise carpet area, which is the area enclosed within the walls of a flat, for sale. 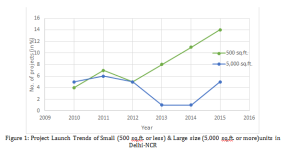 ‘’Are developers and authorities overlooking this? Understanding the fact that government is working towards making India at par with its international counterparts, shouldn’t we be concerned about the quality of living?’’

It is a known fact that NCR is largely investors market. So, are developers resorting to Sachet Marketing Strategy? Or is it to increase the market penetration? Are developers just trying to serve the investors more than the end-users?

Shrinking apartment size has become a worldwide phenomenon. Recently, Victorian government released its discussion paper, Better Apartments (May 2015). The main issue discussed was that the size of apartments being built are too small.

‘The majority of Victoria’s newest apartments are so small they would be considered unlivable in Sydney. More than three-quarters of new one-bedroom apartments built across the state are 50 square metres or less, which means they probably would have been illegal in Sydney, London and Adelaide.’

But the good point is that the government is considering it as a problem and working towards finding a possible solution.

Another interesting point that is worth pondering is that while the unit sizes are shrinking day by day, not much impact can be seen on the prices. This clearly implies that just reducing sizes will not make housing units affordable.

Critics may say that 1BHK units or service apartments are good from rentals perspective for blue collared and white collared respectively. But in both the scenarios, the projects have to be completed on time and the area should be liveable. Not to mention, it should be affordable for blue-collared. Developers will have to understand that while these housing units are feasible for investors, end-users might not prefer to buy these.

Today’s well-researched buyers are very clear as to what they want. Several consumer sentiments survey conducted by CommonFloor has clearly indicated that most buyers in NCR are buying for self-use. And their preferred property size is 900-1,200 sq. ft. In a nutshell, they mainly look out for a value for money deal, i.e, a livable house with good resale value.
All this calls for a dedicated change in the norms that are set by the government. With mega housing projects like ‘Housing for All by 2022’, Smart Cities getting nod, it is high time that the government wake up from its deep slumber and consider revising these norms. It is imperative to have the basic rules of construction in place to avoid the chaos in future. Otherwise, the day is not far, when NCR’s realty market will be plagued with shoe-size units, with no or very less takers!

In this article, for the sake of simplicity, we have considered general building norms set by the Ministry of Housing and Urban Poverty Alleviation because we assumed that the minimum ‘habitable area’ cannot be less than this.