Typically, residential property sales are slow in the first half of the year. The first quarter coincides with school exams, during which family decision makers tend to steer clear of major disruptions in the schedule. In the third quarter, sales also tend to be subdued because of the monsoon season and Pitru Paksh, which is considered an inauspicious period for new beginnings.

Sales are usually expected to pick up in the fourth quarter, because this time of the year brings with it various festivals which are considered auspicious for purchasing a new house. With a visible increase in new launches and marketing activity, the fourth quarter should be contributing a significantly bigger share to the annual absorption of residential units. However, the primary residential absorption numbers of the past few years tell a different story: 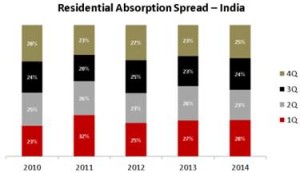 A look at the demand for residential real estate during the past five years shows that, contrary to the general perception that a majority of sales happen in the second half of a year, the absorption is largely the same in both halves. A weighted average of the past five years shows that the first quarter attracts the highest number of deals at 27 per cent, while the fourth quarter (i.e. the festive season) attracts 25 per cent, which is at par with the average.

The hypothesis that residential property sales pick up markedly during the festive season was valid in the pre-2010 period, but it does not hold water today. This is because of the following reasons:

The average age of home buyers has come down from the mid-50s to the mid-20s. The younger generation prefers to take informed decisions and focuses on better bargaining opportunities rather than auspicious days to purchase property.

The service industry is growing rapidly, and now contributes over 55 per cent of India’s GDP. A larger part of this industry announces salary hikes and bonuses in the second quarter. The manufacturing and trading industry, on the other hand, announces bonuses during Diwali – which falls in the fourth quarter.

Many people belonging to the upper-middle and high-income groups plan their investments during the first quarter, for effective tax management purposes.

In short, the trend has changed, and the seasonal impact on housing demand is a thing of the past. If the first half of the year has not seen good business, it is quite futile to expect the remaining half to compensate for the deficit. In any year where such a scenario has played out, it does not make sense for developers to bank on the festive season to bring a significant change in fortunes.